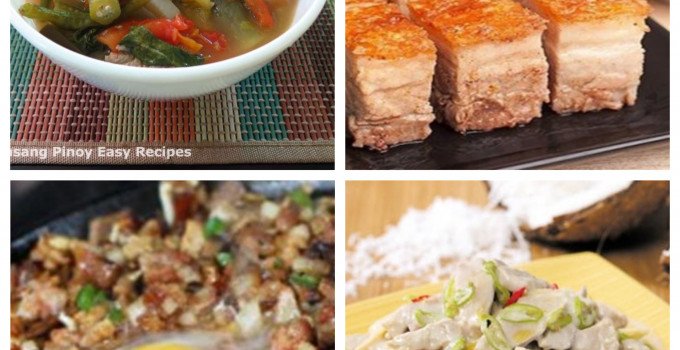 In the Philippine setting, utmost noticeable during celebrations, this is the kind of sin that’s not really that grave but considerably makes everyone feel a little bit guilty because once it’s on their plate, all that they want is to have some more– voila`, that’s nothing else but pork dishes!

But really, what else do we know other than the fact that for everyone despite their ages, this type of main character in their meals is what they are all seemingly looking for?

Aligned with that, to further develop not only your tummies but as well as your brains, let us dive in into some interesting information regarding your top-favorite locale food!

With some features which can be described as bit alike to Lechon Kawali, Bagnet is a deep fried pork belly meat wherein the lean meat are best enjoyed in ‘dry’ form and its pork skin and fats are deep-fried until the crispy texture is achieved. Bagnet is best eaten in every occasion, as it complements other dishes too well because of its seemingly ‘basic’ form.

This dish is a pork stew which is mainly combined with siling mahaba, coconut milk, basic condiments such as onion and garlic, and shrimp paste is sure to kick in some spicy twists that you’ll surely have the next round on… that’s if, if you’re into hot stuff.

Place of Origin: As what its name suggests, Bicol!

Another spicy top up for you, bopis! This pinoy dish is mainly made up of the lung-part and heart which then is sautéed’ in the most complementing spices it could ever be combined with- chilies and onions! Also, adding up some tomatoes is what completes the said combination.

Place of Origin: Although this dish is of Spanish origin, we Filipinos have placed a lot of remarkable changes into it. The first regions which have made these changes are Pampanga and Bicol.

Usually prepared as a pulutan, tokwa’t baboy is hailed as one of the top-favorite dish whenever the occasion’s all about having some ‘good-time’.

Place of Origin: Although pertained as largely influenced by the Chinese, its popularity is significantly stemmed from Cavite.

If bopis is about the heart and the lungs, when talking about sisig preparation, it’s now where the ears, liver, and brain take their final role. Alike the previous dish, this one is also popular among a wide variety of beer-lovers as much as how diverse its types are.

Also, it tastes just as interesting when paired with even a still steaming hot rice.

This is a type of pan-roasted dish made from pork that is also prepared through series of deep-frying! But before that, it undergoes boiling first so as to achieve the target texture of the pork when the frying is already done.

Place of Origin: Bulacan; in some areas dominated by the Tagalogs.

If you’re not that much into spicy or salty, rather is into sweet and sour, then this dish is sure to back up your cravings! Pork humba is generally prepared with (dried) banana blossoms (which is the reason for its indeed memorable taste) combined together with our main ingredient, pork belly with soy sauce.

This dish as suggested by its name is mainly composed of the following: Pigeon peas which are also known as kadyos, and of course, pork and jackfruit. This is well-loved especially in the place where it first originated from and is highly considered as the pride of the region!

With all the versions of pork barbecues that thereby exists, our kind of barbecue is sure to rock on as proven by how it unfailingly, can be seen not only in the streets but as well as in different gatherings!

Place of Origin: Since this is a form of cooking that’s attached to the nature of every individual- grilling, obviously, it can’t be objectively affiliated with a certain region in the country.

A sour soup that is undeniably the top favorite that is present on almost every weekend in the family’s table! In fact, this dish is so much loved to the point that there are actually a lot of versions of it and describing their differences one by one would surely take up a lot of time!

Yet, generally, the common differences in the preparation of sinigang na baboy are represented in the following ingredients: tamarind, santol, guava, tomato, wild mangosteen and mango (green). The following stated are the known souring agents used for different types of sinigang. Hence, what generally makes each version unique.

Place of Origin: In various regions dominated by the Tagalogs!