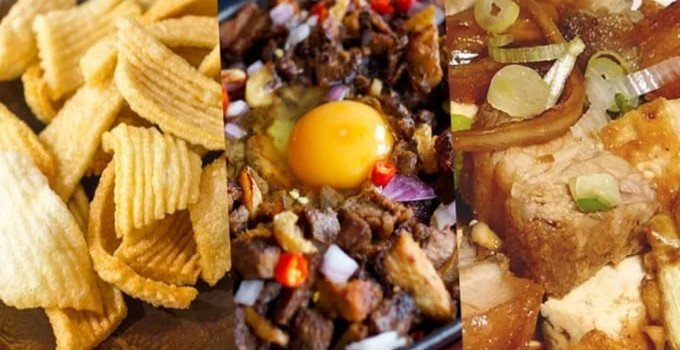 Filipino cuisine is not only delicious but it’s also diverse with tons of different recipes in different regions for just one dish. But certain Filipino recipes are only found in a certain province or region in the country. Some of which people in the city never heard of before and people who moved to the city from the province are missing.

Exploring the different provinces and regions of the Philippines will definitely expose you to these unique regional recipes. Some Filipino recipes here are found nationwide but there’s just something a little extra special when you taste it from its location of origin. The Filipino that you’ll discover when you venture out of the city is unique and delicious.

Pinakbet or pakbet is an indigenous Filipino vegetable stew that originated from the Northern region of the Philippines, mainly the region of Ilocos. The name of the dish is derived from the Ilocano word pinakbet which means shriveled or shrunken. This can be attributed to the dish’s cooking process that calls for the vegetables to be sweated in the pot until it’s totally shriveled or has shrunk.

Pinakbet’s original recipe up North is entirely made of indigenous vegetables including okra, ginger, ampalaya, eggplants, tomatoes, sitaw, and more. Seafood or bits of precooked meat added after the dish is cooked for extra flavors.

If you translate pancit bato in English, you’ll get the words rock noodles. But the dish’s name derived from its place of origin, the town of Bato in the province of Camarines Sur, Bicol. The pancit bato’s noodles are distinct from other types of noodles in the Philippines as the locals of Bato have created it to have a harder texture with a good smokey flavor.

The noodles come in different sizes from small, medium, to large but always retains its weird shape of being round but flat at the same time. The two most popular cooking methods for pancit bato are guisado and sinabawan.

This next entry is already quite familiar to city folks and is readily available in various restaurants and bars all over the city. But sisig originated in the Angeles City in Pampanga and the original sisig recipe in Pampanga isn’t quite the same as what is served in the city.

Sisig’s original recipe rarely use eggs and calamansi juice as toppings or mayonnaise mixed in with the meat. Sisig is a Kapampangan term which means to snack on something sour. The original recipe uses pork’s cheeks, ears, and even brains. Mixed in with various native vegetables and seasonings to achieve that meaty and sour taste.

See also: The Best 13 Sisig Recipe Available in the Philippines

This is another indigenous vegetable stew dish from Central Philippines, specifically from the provinces of Nueva Ecija and Pampanga. Gising-gising is classified as a ginataang vegetable dish because its ingredients are stewed in coconut milk. Translated to English, gising-gising means ‘wake up wake up’, a term given to the dish because of the belief that it stimulates alertness to those who eat it.

Most of the Philippine’s noodle soups are highly influenced by other cultures like the Chinese but this one is authentically Filipino. Batchoy originated in La Paz, Iloilo City and is the reason why it’s also most commonly referred to as La Paz Batchoy.

The noodles are round egg noodles or ‘miki’ and the ingredients are commonly pork organs, shrimp, chicken and beef which are stir-fried first then added with soy sauce. The ingredients are then transferred to a bowl with noodles then the broth is added. It’s then topped with pork cracklings, leeks, and an optional raw egg.

Chicken inasal and commonly known as inasal is a popular recipe all over the Philippines. The recipe originated in Bacolod City where this simple but filing chicken recipe has become the city’s specialty dish. At its essence, chicken inasal is a marinated chicken slowly roasted hot coal while being basted with marinade. The marinate mixture is where the flavor of the chicken lies and is commonly made up of calamansi, coconut vinegar, pepper, and annatto. This gives the chicken this beautiful orange glaze.

The Philippines is surrounded by vast seas and on all sides and it’s no wonder why seafood dishes are so common in the islands. Kinilaw is just one great example of what Filipinos can do with the available seafood they have. Kinilaw is a raw seafood recipe that literally means ‘eaten raw’ and makes use of fresh fish straight from the sea.

Raw tuna is usually the fish of choice but other fish species can be used, it’s then mixed with vinegar and calamansi juice that renders it safe for cooking along with the mixture of bell peppers, chili, ginger, and onions.

Adapted from the Spanish recipe called Valencian Paella, the Filipino Paella or Paelya is a huge rice dish that makes use of the native ingredients found in the Philippines and differentiates itself by using the native glutinous rice or ‘malagkit’ and is characteristically topped with sliced eggs. Other characteristic ingredients of the Filipino Paella are turmeric, annatto, and safflower.

Like with a lot of Philippine dishes, Paella ingredients vary from region to region with each place making use of their native ingredients to incorporate in the dish. For that reason, you won’t find similar recipes for Paella in different places in the Philippines.

Humba originated in the Visayan region and most of the Southern parts of the Philippines. It’s very similar to the famous pork adobo in appearance and even it’s preparation. Like adobo, humba has a tasty sauce that’s made up of soy sauce, vinegar, bay leaves, peppercorn, and garlic. The difference is that humba mainly uses pork belly and fermented black beans and includes brown sugar that sweetens the entire dish. The dish also commonly includes hard-boiled eggs and banana blossoms that all in all makeup for a very filling meal.

This next entry has been popularized all over the Philippines. Bopis is speculated to have Spanish origins but the exact region and place of its origins are now lost. Nonetheless, each region has created their own version of this piquant spicy dish. Its ingredients commonly consist of pork or beef lungs and hear and they’re sauteed in tomato paste, chilies, and onions. The heart and lungs are first boiled then minced and the vegetables are also minced before adding to the pan.

See also: 10 Pinoy Pork Recipes and Their Place of Origin

This unique dish can only be found in Zamboanga and some parts of Malaysia where it’s known as Satay. Satti is a spicy breakfast dish in Zamboanga and is most commonly served in local Satti Breakfast Houses. Satti is characterized by its Satti Sauce where grilled bits of meat float inside. Sticky rice cooked in coconut leaves and skewered meat like chicken, pork, or beef is then dipped in the delicious sauce.

Curacha is another specialty dish found in the Sulu province of Zamboanga and Bataan. Curacha is a local Chavacano word that means cockroach. And the dish is named after the unique crab species found only in the Sulu waters which resembles a cockroach The crabs are uniquely red in color when they’re alive and remain red when they are boiled for cooking. Locals like to steam or boil the crab so it can preserve its natural flavors.

Inun-unan is commonly found in the Visayan islands and it’s their version of paksiw. The dish is a fish recipe sauteed in vinegar, peppercorn, and ginger, it’s a very simple dish that gives a strong delicious flavor. Any variety of fish can be used to cook inun-unan depending on your preference but the most common fish used in the recipe are milkfish, tilapia, and round scad. The fish is boiled with the ingredients mentioned above in a pot and added with vegetables of choice before serving.

Traveling all the way to Ilocos, this next recipe is their specialty version of the infamous dinuguan. Dinardaraan is the Ilocano term for dinuguan but unlike the Tagalog’s dinuguan, dinardaraan is a lot dryer than the soupy dinugaan and can even be oily. It’s still a pig’s blood stew though and uses pork and pig innards in its recipe. The pig intestines and meat are first fried until crunchy before its integrated with pig’s blood with seasoning in a separate pan.

Kakanins or rice cakes are indigenous Filipino delicacies dating back to pre-colonial times. Espasol is just one of the many delicious rice cakes in the Philippines and it originates in the province of Laguna. Its cylinder shape makes it an ideal treat to sell at bus stops for travelers and is probably the reason why it has grown in popularity all over the country. Espasol is made with rice flour, coconut milk, sugar, and shredded milk and completed with a dusting of rice flour.

Binakol is a chicken soup that originated in the province of Aklan in Western Visayas. This delicious chicken soup is made from the native chicken in Aklan and is traditionally bamboo tubes or coconut shell where the chicken is simmered in coconut water with grated coconuts. Other ingredients are added to flavor the broth including leafy vegetables, onions, garlic, ginger, lemongrass, and fish sauce. Chilis are also added to add some spice.

Kalamay is another Filipino rice delicacy that originated in the Visayan region during Spanish times with different variations from each island. It’s a popular pasalubong among travelers and its also commonly sold at bus stops. Kalamay is the majority of Visayan languages is synonymous with sugar. The kakanin’s dark color is hugely attributed to its ingredients of brown sugar mixed with coconut milk and glutinous rice. Kalamay is most unique in its packaging of empty coconut shells.

Influenced by the Spanish Longaniza and Chorizo, Filipinos have created their own version of these meat sausages. Longanisa or Longaniza and Chorizo were brought to the Philippines during colonial times and Filipinos quickly developed their own version called longganisa with different regions making the beloved meat sausage with indigenous spices. Most Filipino longganisa is dyed red, yellow, or oranged with achuete seeds. The most common version of longganisa in the Philippines is the Kapampangan Longganisa.

Binaki or otherwise known as pintos is a common street food found in most of Northern Mindanao and Cebu and is also commonly bought as pasalubong for travelers. It’s a steamed corn cake wrapped conveniently in corn husks. This sweet corn cake is made from a mixture of coarse cornmeal, milk, butter, baking powder, and white or brown sugar wrapped in corn husks and steamed until the mixture is firm.

Laing is a vegetable dish made up of taro leaves stewed in coconut milk. This delicious breakfast and afternoon snack originated in the region of Bicol. Bicolanos have a love for ginataan recipes and laing became one of their specialty dishes that became popularized throughout the country.

The dish is made of taro leaves stewed in coconut milk along with bits of meat or seafood, labuyo chili, lemongrass, shallots, garlic, ginger, and shrimp paste.