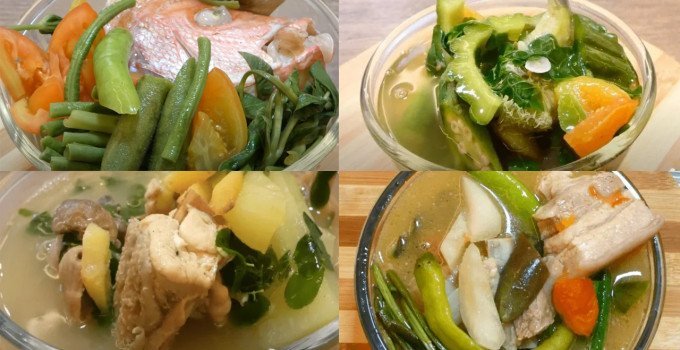 Filipino cuisine is best known for its savory meaty protein-rich dishes with rich flavors that are best paired with rice. Its sabaw or soup recipes aren’t really highlighted that much when discussing the best Filipino dishes that people should get to try. But Filipino soup recipes have carved up a cozy category of its own in Filipino cuisine.

Soups in the Philippines is a staple dish for Filipinos. In a country that experiences hot temperatures in most days of the year, warm soup recipes surprisingly proved to be a favorite among Filipino households. Unlike in most Western cuisines, Filipino soup recipes are a lot more flavorful and can be eaten as its own filling meal.

Many entries on this are huge comfort foods and bring out a sense of nostalgia for many Filipinos. Read on to learn about the best sinabaw Filipino recipes!

This first entry is one of the all-time favorite recipes of any Filipinos out there. There are going to be more sinigang entries on this list but sinigang na baboy is the pinnacle of a sinigang recipe, in our opinion. Pork is much often the protein of choice for many Filipino and a lot has grown up with enjoying pork sinigang at mealtimes with their families.

The combination of the sour broth with the tender pork with its layers of meat and fat screams the perfect filling Filipino meal.

This is probably one of the most underrated Filipino soup recipe. Tinolang manok is a classic Filipino dish that always seems to be kept under wraps despite it being a staple dish in Filipino households.

The flavors aren’t as powerful as a sinigang dish but each spoonful of this soup gives a little kick of delicious flavor. Not to mention tinolang manok is quite a healthy dish to consume. The chicken broth is light and savory. It’s the signature ingredients of papaya, ginger, and siling labuyo leaves gives it its distinctive flavor.

Plus, shrimp sinigang serves as a great introduction to other sinigang recipes for foreigners.

Bulalo probably serves the most tender meat in any Filipino recipes. This beef broth is made by boiling beef shanks and bone marrow until all of the beef’s fat and collagen have integrated into the broth. It’s a slow cooking process that tends to start at the morning if you want to serve bulalo for lunch.

The results are worth it as you’re rewarded with the tenderest beef that will melt in your mouth with every bite. Other ingredients like leafy vegetables, corn, and fish sauce further elevate the broth’s flavor.

Nilagang baka is a milder version of the bulalo soup but that doesn’t mean it’s any less delicious. Nilagang baka and bulalo are essentially the same dishes but the former typically don’t use bone marrow and beef shanks in the dish. If you want to cook up a one-pot beef meal that’s hearty and captures the Filipino flavors, nilagang baka is the go-to dish that never fails.

The addition of several more healthy ingredients like potato, celery, carrots, etc. more than make up for the inclusion of beef shanks and bone marrow.

Pancit lomi is a delicious noodle soup dish that’s been present since ancient times when our ancestral Filipinos were trading with Chinese merchants. It has a rich thick broth and thick chewy noodles. Each household in the Philippines have their own recipe of lomi and uses a variety of different meat and vegetable to include in the broth.

Places like Batangas in the region of Calabarson is famous for its special lomi recipe to the point that city folk from the metro would travel just to get a bowl of this delicious noodle soup.

The last sinigang recipe in this list. Okay, we’re cheating a little bit with this one. Sinigang na isda or fish sinigang can represent a variety of different fish sinigang recipe. The broth’s flavor has subtle changes depending on what species of fish you’re using but the dominant sour flavor should always remain.

Sinigang na isda as a whole offers a milder and somewhat fresher broth compared to pork sinigang. It’s also less salty than sinigang na hipon. Visit any seaside restaurant in the Philippines and they are guaranteed to have some kind of fish sinigang dish on their menu.

Something a little more exotic to the rest of the world, pinapaitan is a popular soup dish from the Ilocos region. What makes this soup recipe so unique is that its ingredients are traditionally made up of cow or goat innards. From its name alone, pait means bitter, this soup dish has a signature bitter flavor that came from the bile. The dominant flavor and ingredients of this dish are definitely an acquired taste but can be crave-worthy once you get used to it.

We’re still in the theme of organs, batchoy, also known as batsoy, is a noodle soup recipe that’s made up of pork offal and beef loin. It’s also mixed with chicken stock, noodles, and pork cracklings that all in all make up for a savory dish. It’s also commonly topped with a raw egg.

Batchoy is commonly seen in menus of restaurants serving Visayas cuisine all over the country but you can get the best batchoy at its place of origin, La Paz, Iloilo.

It’s a little crazy that this entry is the first vegetable soup for in this list and probably the last. Ginisang munggo is a very common dish in Filipino households. The mung beans are typically cooked with fish sauce, tomatoes, garlic, and various other vegetables. The results are an extremely healthy dish that can be eaten as a complete meal or for a snack.

Every household has its own ginisang munggo recipe and Filipino can get creative with this dish’s toppings.

Another much-loved soup from the Visayas region, hinalang is very similar to nilagang baka. The main differing factor is its spicy flavor. This is the fist spicy soup in this list and by the name alone, you can already taste the kick in its flavors. Halang in the Visayan language means spicy and the soup certainly lives up to its name.

Hinalang’s ingredients are also quite similar to nilagang baka but focus mainly on leafy green vegetables and plenty of siling labuyo for that spicy flavor.

The ingredients of the original Chinese soup recipe were altered to perfectly suit the Filipino palate and its popularity quickly caught on throughout the country.

We have second thoughts with including this pochero soup in the list as its not entirely a soup but a hybrid between a soup and a stew dish. The dish originally came from Spain and is now prepared in many parts of the world in countries where countries have left their influence.

In the Philippines, pochero is a soupy tomato-based stew that uses various native ingredients of leafy vegetables, saba banana, and meat. Beef is usually used in this dish but pork and chicken are good alternatives.

Linat-an is another popular dish in the Visayas region that looks very similar to more popular soup dishes like sinigang and nilaga. Pork is commonly used in this dish and many unfamiliar with linat-at would often mistake it for pork nilaga but one spoonful of the soup will prove them wrong.

Linat-an differs from other similar soup recipes through its signature ingredients of lemongrass and red pepper. These ingredients give the soup a fresher and somewhat sweeter flavor.

Pesa is probably the least popular soup dish on this list but it’s a worthy mention. Essentially, pesa boiled fish with miso and plenty of leafy vegetables. It’s a Chinese influenced fish soup that’s mostly prepared by Chinese-Filipino or Chinese immigrants and the dish is rarely seen outside of that community. It’s very easy to prepare and tastes pretty fresh without the undesirable fishy flavor.

This is yet another less known soup recipe in the Philippines, but pinatisan soup has a distinctive taste brought on by the copious amount of fish sauce used in the recipe. Pinatisan is actually a Filipino cooking process where meat is braised in a mixture of fish sauce (patis), garlic, ginger, onion, peppercorns, and bay leaves. Pinatisan as a soup uses the same process and predominantly uses chicken.

This entry is Philippine’s version of the classic chicken noodle soup. It’s mostly eaten during rainy days and when someone’s under the weather. The sotanghon soup typically uses glass noodles in its recipe along with shredded chicken meat, vegetables, and even slices of boiled egg. All meant to be easily digestible and good for the body. Unlike other soups on this entry, chicken sotanghon isn’t typically eaten with rice.

Suam, also commonly known as suam na mais, is a Kapangpangan soup recipe that uses corn, spinach, and chicken. The soup has a thick creamy texture because of the corn. Many suam recipes typically use chili pepper leaves that give the soup a peppery flavor. But many households nowadays get to pick and choose the type of leafy vegetables they want to include in their suam soup.

The last spicy soup dish on this list, kinalas originates from the region of Bicol which is known for the dominantly spicy flavors in its cuisine. Kinalas is a garlicky noodle soup that includes various kinds of meat that should be extracted from near the bones as well as bits of animal brains. It’s a very popular dish in Naga City and has a spicy after taste to it.

Last but not least is the universally loved chicken sopas. Sopas in Filipino translates to soup. The chicken sopas soup is eaten everywhere in the country because of its universally loved flavor. It’s commonly eaten for merienda and during a rainy day. The chicken bits, elbow macaroni, and various vegetable cuts make the dish a favorite among Filipino children. The creamy broth is perfect for consuming during cold days too.