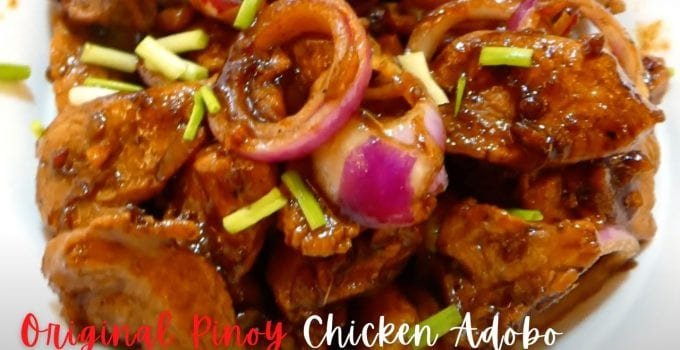 Very much popular in the Philippines, adobo is a favorite dish. This cuisine involves meat, seafood, or vegetables marinated in vinegar, soy sauce, and garlic, which is browned in oil, and simmered in the marinade. Unofficially, adobo is considered the national dish in the Philippines. Each region and even province of the country has its own way of cooking adobo. In this recipe, you will use chicken meat.

Although the name adobo is of Spanish origin, the cooking method is actually indigenous to the Philippines. Early methods of cooking include roasting, steaming and boiling. To further preserve food, it is often immersed in vinegar and salt. Dishes prepared in this manner became known by this name, with the original term for the dish now lost to history. Chinese traders replaced salt with soy sauce, but some adobo purists continue to use salt.

In an adobo dish, not only the meat and way of cooking can vary. The kind of vinegar used can also differ; coconut vinegar, rice vinegar, cane vinegar are some options. Almost every ingredient can be changed according to personal preference. Our adobong manok recipe is easy. Oops. Marinade is a key to a tasty meat so don’t skip that step. Happy cooking!