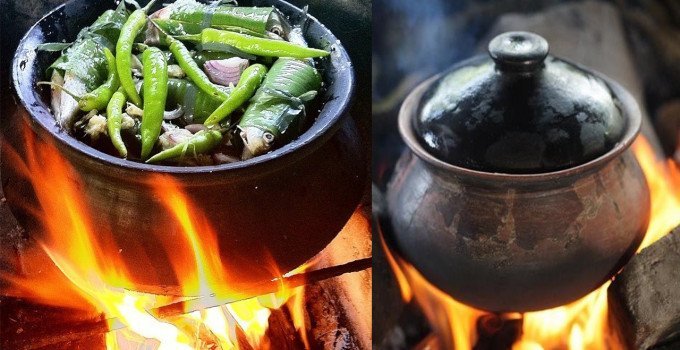 The traditional palayok or clay pot is the ideal cookware to cook traditional Filipino recipes, especially stews recipes. It’s traditionally cooked over hot charcoal but it can be cooked on a stove as well. It can be also used as a serving pot or food container when the food is done. In the Visayas region, these traditional clay pots are called kulon and smaller versions of it are referred to as anglit.

What is Palayok Made Of?

Palayok may be translated to clay pots, but it’s not made up of purely clay. Palayok is made up of a mixture of mostly clay, with added sand and other forms of sediments to strengthen and help mold the mixture. Like many types of earthenware, palayok is made using pottery techniques. It’s molded with the help of water, dried, and then heated up to high temperatures to properly harden the clay mixture.

For decorative purposes, palayok can are often glazed but this can destroy any use of its cooking properties and will only serve as a decoration. Palayok made for cooking aren’t glazed but is manually seasoned by the owner to use it for cooking. Its clay gives the palayok its reddish color and porous properties that helps it evenly distribute temperature inside the palayok.

What are the Good Filipino Recipes to Cook in Palayok?

Traditional Filipino recipes are the perfect recipes to cook using palayok. With the palayok’s shape, the ideal type of food to cook in it is usually stews but it can also be used to roast meat, usually poultry, and its perfect for cooking rice.

Here’s are great Filipino Recipes to cook in palayok:

Adobo is probably the most popular traditional Filipino dish to cook in a palayok. It’s practically what ancient Filipinos cook palayok with. Any type of adobo can be cooked in a palayok as the bowl shape, its porous property, and the slow cooking process of the adobo makes it the ideal cookware to use. The meat of the adobo will come out more tender and the reduction richer because of the palayok’s ability to trap in heat and moisture.

Same with adobo, cooking kare-kare in palayok makes it the ideal pairing in preparing such an aromatic dish like kare-kare. The palayok’s porous property and ability to trap in moisture and heat will only enhance the flavors of kare-kare.

There is no better cookware to cook sinigang with other than the palayok. The sour soup of the sinigang will be much more aromatic and locked in its flavors if you’re cooking it with a palayok. Whatever meat is used in the sinigang will also turn out more tender when cooked with a palayok because of its ability to trap in moisture and heat. It’ll probably be a faster process of tenderizing the meat.

You can cook any type of paksiw using a clay pot from lechon paksiw to any type of fish paksiw. The ingredients inside the palayok will tenderize at a much faster rate using lower amounts of heat, and the flavors of whatever paksiw recipe you’re cooking will lock in the ingredients. You can also use the palayok to serve the dish. Just place it on a potholder and you’re good to go.

Traditional vegetable dishes like pinakbet or laing are some of the ideal Filipino recipes to cook in a palayok. Their method of preparation requires an even temperature throughout the ingredients and plenty of moisture. Using a palayok will give these recipes two times the flavor.

Ginataan recipes are basically a choice of the main ingredient, be it meat, seafood, or vegetables, and stew them in coconut milk. Slow cooking ginataan in palayok is the perfect combination to get a creamy, sweet dish that is ginataan. The heat and moisture will be trapped inside the palayok while the ginataan is steadily cooking and the reduction of the coconut milk will be perfectly soaked by the main ingredient.

Are there any Recipes not Allowed to Cook in Palayok?

It’ll definitely harder to fry your food using a palayok and baking with it is probably impossible. People won’t get the same results when they’re baking using a palayok instead of more traditional bakeware. It’s also not recommended to cook with palayok using recipes that require higher temperatures right off the bat. Earthenware like palayok won’t last long if exposed to sudden changes of extreme temperatures.

What are the Advantages of Using Palayok?

Using a palayok has many advantages, especially if its made up of pure clay or if the majority of its mixture is pure clay. It’s clay properties make the palayok porous and using a lidded pot for cooking helps heat inside the palayok circulate evenly allowing for more even cooking. This also keeps the ingredients being cooked inside the palayok retain more of their nutritional properties compared to other cookware not made out of clay.

Cooking food in a lidded clay pot also gives the ingredients more flavors and makes it more aromatic. Meats that are cooked in palayok remains tender and juicier for longer once it is taken out of the palayok.

How to Properly Cook with Palayok?

Remember that cooking with earthenware like palayok doesn’t follow the same rules as cooking with more modern cookware. Palayok needs to be soaked in water in 15 minutes first before its used for cooking. This helps the palayok transfer heat to the ingredients inside which doesn’t normally work for dry palayok. Afterwhich, it’s just a matter of following the recipe and putting your ingredients inside the palayok.

Remember not to expose the palayok to extreme temperature changes as this can cause it to break and crack. Adjust the temperature gradually when cooking with a palayok to prevent damage.

Are there any Health Benefits of Cooking with Palayok?

Do you need to treat palayok?

Yes, you need to treat palayok before and after using it for cooking. Some may find this time consuming but its a really simple process that helps the palayok retain its properties. Don’t use oil or soap when treating a palayok, instead, just fill it up with water then rinse after 20-30 minutes.

Then add about ¾ths of water in the palayok and add a pinch of salt, cover the palayok and set it to low heat on the oven. After some five minutes, turn it up to medium heat and wait for it to boil. After the water’s boiled, give the palayok one last rinse and set to dry. You have now a treated palayok ready for cooking.

How do you clean Palayok?

You won’t have to use any dishwashing soap to clean palayok. It’s not really recommended as more than likely, the porous material of the palayok will observe the chemicals of the dishwashing soup. Use water and rock salts instead, rinse, and dry. For a harder cleaning job, it’s recommended to use a brush and if you really need extra help to get your palayok clean, use organic liquid soap to wash out those stubborn food materials.