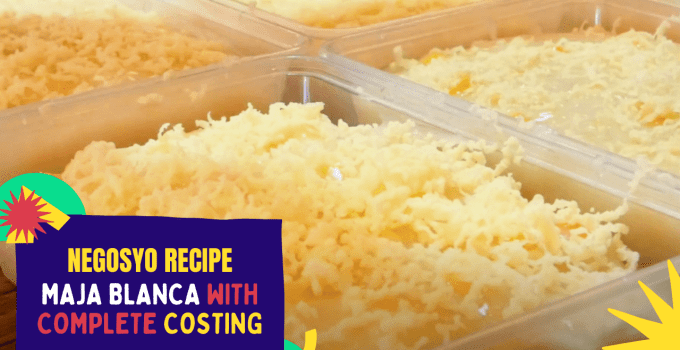 Hey there! We’re back again with another negosyo recipe for you to potentially make a profit with. This time, it’s for the delicious Filipino dessert recipe, maja blanca. Since we’re almost midway into the ‘ber’ months and Christmas fast approaching, I thought it would be a good idea to share this maja blanca recipe. Not just for you to enjoy but to also earn some money, right?

This delicious maja blanca recipe is relatively easy to make but you’ll need to exert in some physical effort to achieve the consistency that’s called for with this dessert. I always described time in the kitchen with cooking maja blanca as an arm workout and sauna session. Not only are you creating a delicious light dessert, but you’re also cleansing your pores and getting physically fit. You’ll see what I’m talking about when you see our video cooking this recipe.

With that disclaimer out of the way, what is maja blanca exactly? For those who don’t know, maja blanca is a delicious Filipino coconut pudding dessert. It’s light in flavor and creamy in texture and all-around delicious. It can be served on the table at any time of the year but it’s especially popular during the holidays, fiestas, and Christmas.

Maja blanca isn’t an indigenous Filipino dessert. I saw some food blogs online describe maja blanca as a kakanin recipe or Filipino rice delicacy but I’m not quite sure about that. Even though this coconut pudding dessert is typically grouped with other kakanin dishes like sapin-sapin and kutsinta because of similarities in texture, maja blanca doesn’t have any kinds of rice as an ingredient.

I was also under the impression that maja blanca also has rice in its ingredients list because it’s often lumped in with other kakanin desserts and snacks. I learned that’s not the case when I learned how to cook this delicious dessert so I’m hesitant to actually call maja blanca as a kakanin. Or am I being too technical with this? What do you think?

Unlike other kakanin recipes, the first version of the maja blanca was introduced to the Philippines by the Spaniards during the Spanish colonial era. They brought a kind of milk-based delicacy to the archipelago all the way from Europe, which they call a manjar blanco. Manjar blanco is actually an umbrella term that the Spanish speaking countries refer to various delicacies made from milk.

Sources online say that the specific manjar blanco dessert that they introduced to Filipinos at that time is something called the Blancmange. Our ancestors liked this dessert so much that, like many other foreign recipes, they adapted it as their own and modified the recipe using native ingredients.

We replaced almond milk with coconut milk to make the first versions of maja blanca. I was surprised to find that blancmange recipes would often use rice flour to thicken the dessert. Here in the Philippines, we use cornstarch in our maja blanca as our thickener rather than rice flour, so why?

Maybe the Spaniards introduced a version of blancmange that only used cornstarch, who knows. But the Filipinos back then loved the dessert enough that we’re cooking and consuming it to this day.

It’s a fantastic dessert that’s light, creamy, and also highly versatile with whatever you want to do with it. You can add different flavorings to the recipe to create different versions of the maja blanca, like ube and pandan.

My favorite is the plain original flavor of maja blanca but with grated cheese for toppings and not the typical latik or brown coconut cream curds. I think the contrast of the sharp cheesy flavor against the light creaminess of the coconut enhances the entire dessert.

I also love to mix-in corn kennels in the maja blanca so create a more dynamic texture. The result is a delicious light dessert. Deliciously sweet but also light enough to be the perfect palate cleanser after eating savory Filipino dishes that are packed with rich flavors.

It’s the perfect time to learn this recipe because a lot of Filipino households are starting to find the best maja blanca out there they can purchase. All of the ingredients that you need and the cooking instructions are enumerated down below if you want to give this negosyo recipe a try.

Not only that we’ve also included a breakdown of the expenses that are needed to purchase the ingredients and other items to create and present this recipe to be sold. This is only the second time we’ve included this nifty feature for our negosyo recipe and we’ll definitely be doing more of this costing breakdown for our future negosyo recipes.

Other than the ingredients, instructions, and costing breakdown, we also included a fun video that shows the entire process on how to cook this recipe down below. Give this great maja blanca a try to make a profit or to just give your family and friends a special treat. Enjoy!