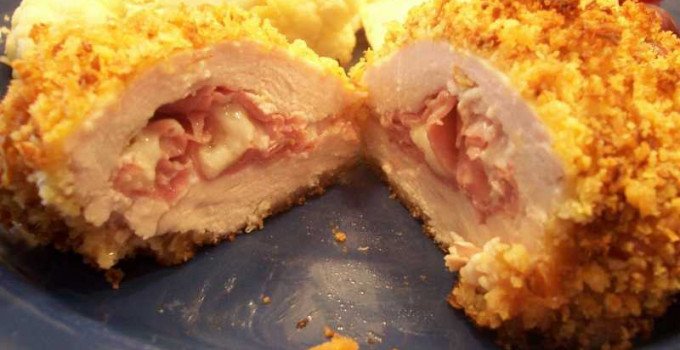 Learn how to cook your favourite chicken Cordon bleu in this easy-to-follow cooking instructions.

Am I the only one here who thought Cordon bleu as a dish with that royal blue color? Yes, as a child, that is my perception of this dish. Well, at least now I know that it is not what I thought it was. Generally, a Cordon bleu is a meat wrapped around cheese (or with cheese filling), breaded, and pan—fried or deep fried. The origins of the original cordon bleu as a schnitzel filled with cheese are in Switzerland, probably around the 1940s, first mentioned in a cookbook from 1949. The earliest reference to “chicken cordon bleu” in The New York Times is dated to 1967, while similar veal recipes are found from at least 1955. The French term Cordon Bleu is translated as “Blue Ribbon” (at least the meaning of the term is not that far from what I first thought of the dish).

Modifications and variations now exist in the preparation of this Cordon bleu. Instead of being fried, the chicken can be baked such as in this recipe here. Other common variations include omitting the bread crumbs, wrapping the ham around the chicken, or using bacon in place of the ham. Among Muslims, the halal version of chicken Cordon bleu is also popular; the chicken is rolled around beef or mutton instead of pork product.