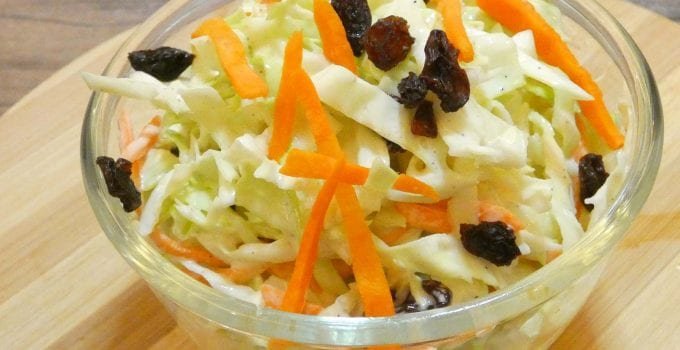 Filipino dishes are typically meat-based recipes and stewed or stir-fried vegetable dishes and most of them are eaten with rice. Salads or ensaladas, as known in the Philippines, aren’t really highlighted that much in Philippine cuisine.

I know that in Western and Mediterranean cuisine, salads dishes are regarded as delicious meals in and of itself with large portions in a bowl but in the Philippines, salads are more of a side dish with the star of the meal bein a more hearty Filipino recipe.

Salads in the Philippines are also highly considered to be snacks brought out for meryenda with family and friends. Buko salad or other types of chilled salads are the most common ones eaten during midafternoon to get cooled down from the afternoon heat.

Ensaladas are also typically served in small portions for appetizers for a meal and as a palate cleanser. I do know some people who make ensaladas for their light breakfast but that’s pretty much it. Filipino vegetable recipes are typically either stirfried or stewed with coconut milk including ensaladas.

The traditional salads where raw vegetables with dressings that the Western world knows so well is a rarity in the Philippines and Asia in general.

So it’s fair to say I was quite confused when I entered a cafe and ordered a meal and when the food arrived, there’s a small bowl of coleslaw. This was during my college days and that particular cafe served fusion cuisine.

I ordered a plate of protein with rice and I honestly thought they made a mistake with their atchara. So I looked around to see the table near mine ordered the same thing and they have the same small bowl with the coleslaw so that I assured me that there wasn’t a mistake made.

It was silly, I know, but at that point, it was my first encounter with a bowl of coleslaw. I remember the first time I ate at that cafe, I barely touched it at first. I took a small bite of it and it was mildly sweet with the strings of cabbage making a soft crunch as I bite into it.

After finishing the main course, I dug onto that small bowl of coleslaw and finished everything. Learned that it served as a nice palate cleanser as well.

I went several more times to that cafe and had my side dish of coleslaw with my main meal until I eventually graduated and moved to a different area. I still vividly remember that flavor of that small bowl of coleslaw.

I learned that coleslaw, also known as slaw, is cabbage salad from Dutch cuisine and it’s quite a common salad recipe across the Western world with different countries having different versions. The closest thing of the coleslaw we have in the Philippines is atchara.

So I wanted to recreate it here. I do think it’s a shame that not very few Filipinos know about this salad, at least for a palate cleanser. It’s similar to atchara but with a different taste profile so I think that Filipinos won’t have a problem adding it to their meals if they’re serving some protein.

So here’s my recipe! I highly recommend making this if you’ve got guests that you want to impress. I specifically chose the ingredients so that anyone can follow this and it fits right in the Filipino palate.

We’re going to need finely shredded cabbage. Some recipes I saw online mixed red cabbage and with the standard one but for this one, we’re just gonna use the regular old cabbage. For a pop of color, we’re also going to use thinly sliced carrots.

This recipe is fairly easy to follow. The only thing that can be considered time-consuming is prepping the cabbage and the carrots but other than that, this recipe requires minimal effort to make. Enjoy!