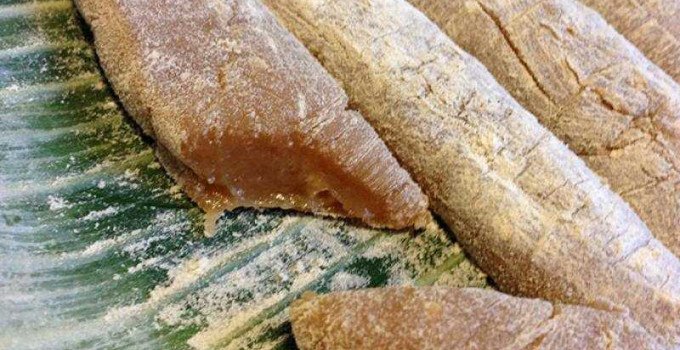 Ready for another rice cake? This one is something familiar to those who usually travel around by commuting, especially around Laguna.

Espasol. That dusty thing sold by a number of vendors, especially when you are riding a bus. Well, before you grimace at the thought of eating it, know this native, sticky sweet first. Espasol or Baye-Baye is a cylinder-shaped Filipino rice cake originating from the province of Laguna. Basically, it is made from rice flour cooked in coconut milk and sweetened coconut strips, then dusted with toasted rice flour. That explains the appearance.

There are already several ways of having your espasol ready. In Laguna, espasol is made with galapong (flour made from glutinous rice), grated young coconut, and sugar. Meanwhile, in Penaranda of Nueva Ecija, it is made out of galapong, carabao milk, condensed milk, butter and sugar, with the galapong made from rice that has been roasted for an hour. This recipe here is adapted from that of Nueva Ecija version. Toasted glutinous rice, vanilla soy milk, agave nectar, salt, vanilla extract, lemon zest, and shredded coconut are used. This is easy to do. So prepare your pans. Ready? Oh. You might want to compare the taste of what you will be doing today with that being sold around. I wonder which will be better? Happy eating!