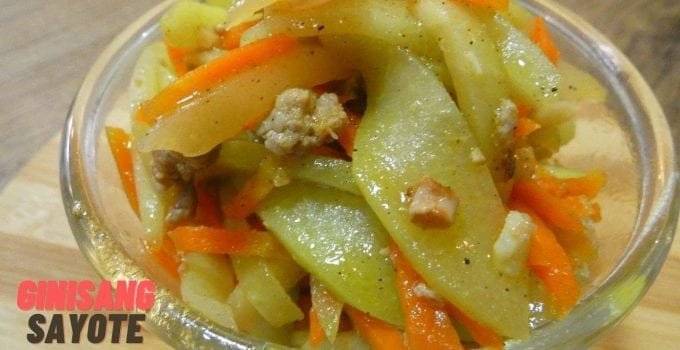 Want to introduce more healthy options to your diet but don’t know where to start? This budget-friendly ginisang sayote recipe is the perfect recipe for you. Let’s elevate this simple plant into a delicious ulam that can be eaten for breakfast, lunch, or dinner. We’re going to be using simple and typical Filipino ingredients that we can buy in our public markets.

Sayote plants aren’t that tricky to cook with and it’s a great alternative to any plant-based recipe that you want to try out. It’s described in the Philippines as “green gold” because of its availability all year round, almost every part of the sayote can be eaten, and its relatively cheap price on the market.

I would highly recommend for people to try this ginisang sayote recipe if they’re looking for a vegetable recipe that they can cook every day. Plus, sayote is extremely healthy. How healthy? We’ll take a deeper look at the health benefits of sayote later on in this recipe.

Honestly, I used to have a hard time distinguishing sayote from other plants on my plate before I started cooking. I didn’t realize that it’s actually a very versatile plant that can be put in basically any Filipino recipe. From tinola, side dishes, and salads. Plus, it’s also a great alternative to other leafy ingredients and even squash ingredients in Filipino dishes. I wouldn’t even know that I was eating sayote because I often mistake it for other ingredients before.

Sayote has a mild sweet taste that’s almost like squash with some hints of cucumber. I know that a lot of Filipinos have tasted sayote at one point in their lives or another. The best I can describe it is a mild combination of the flavors of cucumber and squash or kalabasa. This goes amazingly well with a lot of Filipino dishes.

In this ginisang sayote recipe, we’re going to saute our chayote. We’re going to use the flesh of the actual sayote fruit for this dish and mix it up with aromatic ingredients, vegetables, spices, and pork. If you’re a frequent viewer of this site, you’ll know that to gisa or sauteing a dish is just one of the many cooking techniques that we Filipinos frequently use.

Sayote is such a versatile ingredient to use that sauteeing it won’t be a problem, unlike other fruits. Come to think of it, sayote is the only fruit that I can think of that is only used for savory dishes and not for desserts which is how we Filipinos typically use fruits as an ingredient.

Sayote, or internationally known as chayote, is an edible climbing plant that produces a pear-shaped fruit. Almost all parts of the sayote can be eaten, including its roots, shoots, and leaves. Sayote is actually native to Central America and is part of the gourd family of vegetables (I’m not sure at this point if sayote is a vegetable or a fruit) along with cucumbers, squashes, and melons.

It was first cultivated by the Aztecs and the Mayans. Chayote is a European name that is derived from its original Nahuatl or Mexicano name, chayohtl. Through the Europeans, the fruit/vegetable was introduced to different parts of the world using trade.

In the Philippines, it’s said that sayote was one of the many fruits, grains, and vegetables that was introduced to the country from the New World (America) through the Manila galleon trade.

Today, sayote is widely used and one of the cheapest fruit/vegetables in the Philippine market. It’s primarily cultivated in the northern highlands of the country in its Benguet Region and parts of the Cordillera Administrative Region. We Filipinos typically use the fleshy parts of the fruits like we usually do with our kalabasa but I’ve also seen plenty of recipes that make use of sayote’s different parts.

Sayote is definitely one of the best ingredients to have on your dish if you want to eat something healthy. This cheap vegetable/fruit is surprisingly packed with plenty of health benefits considering it’s not at all expensive.

If you’re on a diet, sayote is a great ingredient to have because it’s low in carbs, fat, sodium, and calories. Plus, it has plenty of nutrients especially Vitamin C, potassium, and folate or Vitamin B9.

Sayote is also rich in antioxidants which protect against cell damage from free radicals. Its antioxidant properties help prevent inflammation, diabetes, and cancer in the body.

One of the best Filipino recipes to learn. This recipe is very similar to ginisang sayote but it’s a lot more colorful and the string beans give it that high levels of folate. Plus, the colors of this dish are just picture-worthy.

Just like sayote, mung beans, the main ingredient in this recipe, is packed with nutrients and antioxidants. Plus, it’s incredibly delicious and can be paired with practically any protein. It’s also a versatile ingredient and can be found in many Filipino recipes.

Tahong or clams are one of my favorite ingredients to work with because it forces any cook to be more creative in the kitchen. There’s not much you can do with clams but sauteing it with Sprite results in this very delicious dish that everyone should give a try. Not to mention that clam has plenty of health benefits because it’s a great source of protein, vitamins, and minerals.

Now on a sweeter sauteed recipe. This ginisang saging or sauteed banana recipe is traditionally called Suam na Saging. This is a childhood recipe from my grandparents that we typically ate for miryenda or as a morning snack. It’s a great dish to introduce to kids.

Last but not least is this ginisang dilis recipe. Dilis or anchovy is a very common ingredient in the Philippines and is normally prepared fried. But as they said, just a little bit of spice and you are met with this delicious sweet and spicy sautteed anchovy dish. This should be eaten with fluffy white rice, of course.

We’re literally only going to use ten ingredients for this sayote dish. Of course, the most important ingredient is sayote. It’s an incredibly easy ingredient to find at the local market and supermarket. Remember to pick a sayote that has no blemishes and is firm but not hard to the touch. I tend to go for smaller sayotes in size because I found that they pack a lot more flavor.

Our other ingredients for this ginisang sayote recipe includes carrots, tomatoes, an onion, and garlic. We’re also going to include ground pork but you can opt to exclude this ingredient if you’re following a vegan diet. The complete list of the ingredients and their measurements are all listed down below.

I’ve been cooking ginisang sayote for years now and you can never go wrong with this recipe. I’ve experimented with it over the years and it only gets better and better. Plus, it’s an incredibly easy recipe to follow. The hardest part in this recipe is literally the preparation (julienne cut). But other than that, it’s just tossing the ingredients at the correct order and sauteeing it to build the best flavors for the dish.

Check out this older version of the recipe: Sauteed Chayote Recipe

This ginisang sayote recipe can be served as a side dish or as the main dish or ulam for breakfast, lunch, or dinner. It can even be served for a healthy afternoon snack or miryenda with a cooling drink to go along with it. I recommend eating it with a plate of hot fluffy white rice, of course, and a cool glass of iced-tea.