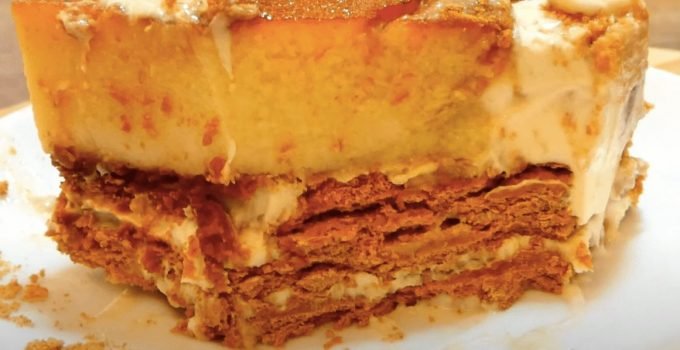 Graham float and leche flan are two of the best desserts to serve in a celebration like fiestas or during the Noche Buena feast. Combining these two favorite Filipino desserts is a fairly recent idea that became quite popular online.

Graham float, also known as fruit float is made up of nearly frozen layers of cream, graham crackers, and a choice of fruit. The most popular one being mango, or most commonly known as mango float, but other fruits used for this dessert aren’t an uncommon sight. Recipe names for this dessert are typically altered depending on what fruits are used. Here are a couple of examples of a graham float recipe:

It should be mentioned that graham float came about in Filipino cuisine as an alternative for the Crema de Fruta cake, a sponge cake that uses layers of whip cream or sweet custard, a variety of tropical fruits, and gelatin or gulaman. It’s a common cake to purchase in bakeries for celebrations like fiestas, parties, and other special occasions.

The graham float came about, probably because people wanted to create a version of crema de fruta cake at their home. However, ovens aren’t a common thing in Filipino kitchens so any kind of pastries needs to be purchased at a bakery. But a common thing in Filipino kitchens is refrigerators so inventive cooks created the very first graham float recipe.

I actually have no idea how it became such a popular thing nationwide. I just know that since I was a kid, graham float, specifically mango float, is already an established favorite dessert amongst Filipinos.

Now, for the leche flan. Leche flan is another hugely popular dessert in the Philippines. Practically every restaurant offering Filipino food has a slice or a whole platter of leche flan on their menu. It’s also an extremely must have dessert during feasts. It’s quite a versatile dessert with a huge history behind it.

We’ll touch on leche flan’s history for a bit. But first, here are a few typical leche flan recipes:

Now, leche flan has a history that goes way back to Ancient Rome. Ancient Romans were the first ones to domesticate chickens which comes with an abundance of eggs at their disposal. With no scarcity in eggs, they started to become creative with using it in their recipes and invent some new ones as well, including a cake-like dessert that was the original recipe of leche flan.

Another noteworthy thing that Ancient Romans did was conquer other lands and its people. Through their conquering, they introduced Roman recipes and that’s how the leche flan recipes became known in parts of Europe and became popular.

Spain and Portugal were particular fans of this dessert and brought it to other places outside of Europe when they were expanding their empire. And that’s how leche flan was spread throughout the world in a nutshell.

It’s important to note that leche flan has different names in other parts of the world. It’s called creme caramel in Western Countries and Flan in Hispanic Countries. Likewise, the way it’s prepared in different countries also largely varies.

So long story long, thanks to the Spaniards and the innovation of Filipino cooks, we can enjoy the deliciousness that is leche flan and graham float respectively.

Now let’s get into this recipe. Graham De Leche Flan Ref Cake is literally just a combination of these two recipes, minus the fruit. It’s a decadent dessert with layers of graham crackers and whip cream serving as its base with an upper layer of leche flan. It’s one of the best desserts that I’ve ever tried. The contrasting textures of the ingredients made for a unique experience and the flavors are no laughing matter as well.

To make this recipe, we need the typical graham float ingredients minus the fruit and a platter or two of leche flan. To follow this delicious Graham De Leche Flan Ref Cake, check out the full recipe below with a complete list of all the ingredients and a step by step instruction on how to prepare this yummy dessert.

We also made a fun video for readers who want a visual demonstration of how to make this recipe. If you’re done, all that’s left to do is take this dessert out of the fridge and serve it to your family. Enjoy!