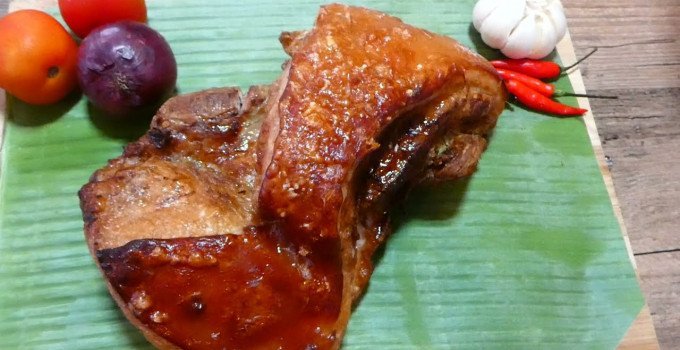 Ah, Lechon! Lechon has always been the star of the dining table in any Filipino occasion and celebration. Whether it’s a birthday party, wedding anniversary, Fiestas, graduation celebration, christening, reunion, or even Manny Pacquiao’s fight! Whatever the reason is, you know it’s made extra special whenever there’s Lechon on the table.

Here in the Philippines, nobody hates Lechon. It is always the first dish on the table to be swooped away by everyone. The ultimate crispiness on the outside with the tender and juicy inside will really make you drool! Pairing it with a cup of freshly cooked rice and a drizzle of its classic Sarsa will really get you going! But for me, sharing the Lechon with my friends as we sip a cold bottle of San Miguel Pale Pilsen is the best way to enjoy Lechon. You know what they say, gotta eat them while you still can!

There are many styles and types of Lechon all around the country, but it can be broken down into just two (2) major methods, the Manila Lechon and Cebu Lechon. Out of these two, Cebu Lechon is the most popular. It is simply because Cebu is the origin of Lechon when the first one was made in the early 1920s. It also gained international popularity when the late great Anthony Bourdain hailed Cebu Lechon as the “Best Pig Ever”.

Manila Lechon, on the other hand, also has an edge of its own! La Loma, in Quezon City, is called the “Lechon Capital of the Philippines” for a reason. Hundreds of Lechon stalls are all waiting for you especially during the months of May and December, the annual Lechon festival and Holiday seasons respectively.

So, if you’re craving for the best-tasting Lechon and also don’t have the time to prepare and roast your own all day, then the Lechon Pork Belly is the best option for you! Luckily, Panlasang Pinoy has got your back because today we will be making a Homemade Lechon Pork Belly!

Don’t be intimidated because this recipe is really easy to make! All of the ingredients you’ll need can be bought from your local market or grocery store. So, are you ready? Let’s begin!

The first thing we have to do is to properly season the pork belly with salt, pepper, lemon juice, and fish sauce. Make sure to apply the seasonings evenly all throughout the meat for the best taste.

Next up, we will now be making the stuffing of our Homemade Lechon Pork Belly. To do this, blend the chili, lemongrass, onion, ginger, garlic, onion leeks, salt, and pepper. After blending it well, make a pocket in the pork belly on one side. This is where we’ll be stuffing the blended mixture ingredients. After stuffing it neatly, set it aside and just let it rest.

Now, we will be searing the Lechon Pork Belly a little bit to add texture and flavor. To do this, heat the pan, pour a little amount of oil, and sear the skin of the pork belly. Do not overcook it, just let the skin turn golden brown a little. After that, just add a sufficient amount of water and allow it to boil. This process allows the meat to become more tender without sacrificing the crispiness of the skin outside. Keep boiling it until the meat is soft, then set it aside.

Finally, we are now going to roast the pork belly. Just preheat the turbo oven and roast the pork belly until the skin becomes golden crispy. You can check the crispiness by simply feeling down the fork down its crispy golden skin! Now, the only thing left to do is to chop the Homemade Lechon Pork Belly and serve it with Sarsa and freshly cooked rice!

What do you think? Really easy, right? The Homemade Lechon Pork Belly is perfect for any meal of the day, be it for breakfast, lunch, and dinner! You can also be creative and make the perfect sauce to pair it with! For more quick and amazing recipes of traditional and modern Filipino dishes, check out Panlasang Pinoy Recipes!