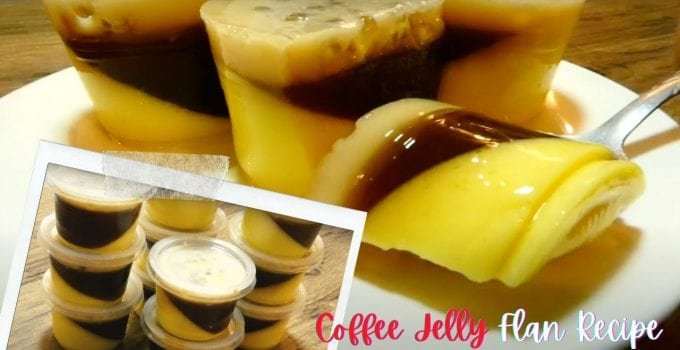 It seems that Coffee Jelly is slowly being more popular as the years go by. This is because more and more celebrations such as birthday parties, reunions, weddings, Fiesta, christenings, and more are serving Coffee Jelly as their primary dessert! Some even pre-pack the Coffee Jelly dessert so visitors and friends have something to bring home. Actually, a celebration seems more special when the two partners in crime, Buko Pandan Salad, and Coffee Jelly are present, right? Some people even go for these freakishly good desserts, too!

Did you know? The origins of the Coffee Jelly, as we know it, can be traced to as far as the 1800s! Yes, the oldest records can be found in Britain, it is said that the Coffee Jelly refers to brewed coffee mixed with gelatin and then left to set in each cup or dish. However, it was not until 1963 when the Japanese introduced Coffee Jelly using a brilliant slogan, “Coffee you can eat!”. Well, if I was already alive during those times, I’d quickly jump on the bandwagon!

Until today, lots of people are going crazy over a delicious cup of Coffee Jelly. One great example is Starbucks’ famous Coffee Jelly Frappuccino! There are a lot of creative ways to work with coffee, and certainly, the same goes with Coffee Jelly. In the Philippines, there is one specific way to make the ever-famous Coffee Jelly dessert. Basically, it’s like the famous Christmas dessert, Fruit Salad. The only difference is that we use coffee-flavored gelatin instead of using the traditional canned fruit cocktail. Moreover, the rich cream mixture will also have a slight touch of coffee! It is best served chilled and after a hearty and delicious meal.

Interesting, huh? Well, that’s what I would also say! Now, how about we level up things a little? How about we combine two of the most-loved Filipino desserts into one? Yes, you read it right. Let’s combine the delicious Coffee Jelly and Leche Flan!

Combining these two, we will get the Coffee Jelly Flan! Alright, just imagine the delicious taste of coffee in a Coffee Jelly and the rich, caramel, and creamy taste of a Leche Flan, I’d say that it’s perfect for all celebrations and can also be a great idea for a business!

So, are you ready? Today, Panlasang Pinoy Recipes will teach you how to make the Coffee Jelly Flan Overload in a Cup Recipe!

This recipe is a little bit longer than most, but don’t worry! It’s very easy to follow and all of the ingredients can be found at your local market and grocery stores. To make it easier, we will be dividing the preparation procedures into three (3) different mixtures. These are the Jelly Flan, Coffee Jelly, and Sago mixtures. Alright? Let’s begin!

Firstly, we will begin with the Jelly Flan mixture. Beat eggs in a bowl well then set it aside. Next, dissolve a pack of yellow unflavored gelatin powder in a pan or pot. Once it has been completely dissolved, add the evaporated milk, condensed milk, vanilla, and the beaten eggs. Keep on mixing it until it becomes well combined. Now, we will start heating the Jelly Flan mixture. Turn on the stove to medium heat, continuously stir the mixture until it comes to a boil, and then turn off the heat. You can now pour the mixture into the Coffee Jelly molds, just pop the bubbles using a fork or toothpick. Finally, let it cool down and rest for a while.

Next! We will be making the Coffee Jelly mixture. To start, combine half a pack of white unflavored gelatin powder and water. Again, keep on stirring until the gelatin powder is dissolved. After that, add the sugar, instant coffee, and evaporated milk. Keep on mixing until all of the ingredients have been combined well. Next, just like the Jelly Flan mixture, slowly turn up the heat and keep on mixing until it comes to a boil. Finally, scoop a sufficient amount of Coffee Jelly and pour it on top of the Jelly Flan mixture in every mold.

Lastly, we will be making the Sago Mixture. Combine half a pack of the white unflavored gelatin powder and water. Keep on stirring until the gelatin has been completely dissolved. After that, add the sugar, instant coffee, and evaporated milk. Keep on mixing until all of the ingredients have been well combined. Again, slowly heat the mixture until it comes to a boil. Now, add the Sago Mixture on top of the cooled Jelly Flan and Coffee Jelly mixture. You can add another scoop on top of it all for a taste of overload goodness. And voila! You’ve just successfully made the Coffee Jelly Flan Overload at home!

How about that? It’s not that hard, right? What’s important is that you can serve a delicious and satisfying dessert to your family, friends, and visitors!