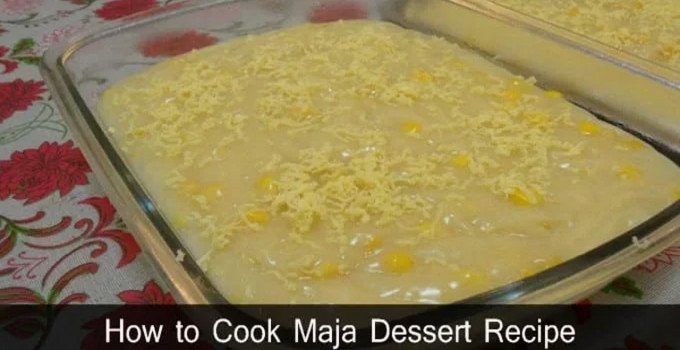 One of my favorite Filipino desserts is Maja Blanca and it’s also one of the Filipino recipes that I discovered later on in life. Unlike other Filipino desserts that are typically served during Christmas, we rarely have a tray of maja blana on our table for our Noche Buena feasts. My family leaned more on the biko and buko salad desserts when it comes to our feasts for big celebrations.

Unfortunately, this means that I only get to discover the delicious taste of maja blanca when I was already an adult. A former classmate of mine invited me to his birthday party and that’s where I first got a taste of this deliciously sweet and surprisingly refreshing dessert. I can imagine myself as a child devouring plates of maja blanca.

Honestly, I was quite unimpressed when I first laid eyes on it. It looked quite plain but I was open to giving everything a taste since it was free food. But the first bite quickly changed my mind.

The taste of coconut with that thick texture along with the kernels of corn was to die for. The cheese only enhances the flavor, giving it a nice contrast with the sweetness of the corn and coconut. It’s the perfect dessert to cool of and if you want your palate cleansed after a savory meal. It’s one of the best “discoveries” I had in my adult life. I really wished I got to had a bite of it when I was younger.

That experience was years ago and I have since learned to make my own homemade maja blanca with a recipe that I put together myself. This came with a dozen internet searches where I pick and choose the best yet simplest ingredients out there for the perfect maja blanca recipe.

Of course, anyone wanting to try this recipe can add their creative touch to it. But first, let’s take a look on the history of this delicious dessert, maja blanca.

Upon a quick research, maja blanca is apparently not an authentic Filipino dessert. It’s an adaptation of a Spanish delicacy called Manjar blanco, an umbrella term of milk-based desserts or milk-based ingredients used in desserts.

There are numerous versions of manjar blanco all over the Spanish speaking world and some parts of Europe. Blancmange is the specific Spanish dessert that the Philippines adapted and created its version into the maja blanca.

Now, the maja blanca that we know of today is quite different from the Spanish’s original dish. Today’s maja blanca was mainly developed in central Luzon where the traditional ingredients for the Spanish dish were replaced with the use of native Filipino ingredients like coconut milk instead of almond milk.

It’s said that maja blanca got its name from a group of flamboyant people in Spain called the Majas. This, I don’t really understand. I fail to make the comparison of the dessert and the Maja as a group of people. The Majas were often described as flamboyant and often wear eye-catching, exaggerated versions of traditional Spanish clothing.

Maybe because they were considered part of the lower class and maja blanca is like an inferior version of blancmange in the Spanish colonizers’ eyes-I don’t know.

Anyway, the plain maja blanca that uses coconut and corn as its main flavors is my favorite but there are various versions or flavors of this dessert including ube, pandan, and cheese.

So that’s what we’re going to do today for this recipe. Keep in mind that plenty of sites out there described making maja blanca as easy, which it is, but you during the thickening process, you’ll need some strength and patience to complete the recipe because we’re going to be doing a lot of stirring white the ingredients are boiling in a pot. Think of it as a sauna/workout session.

Onto the recipe! All of the ingredients for thise delicious maja blanca dessert are listed down below as well as the cooking instructions. If you prefer to make this dessert along with other people, we’ve created a fun video with all the information that you need, including the ingredients and the step by step process. Enjoy!

How to Make Maja Dessert Recipe