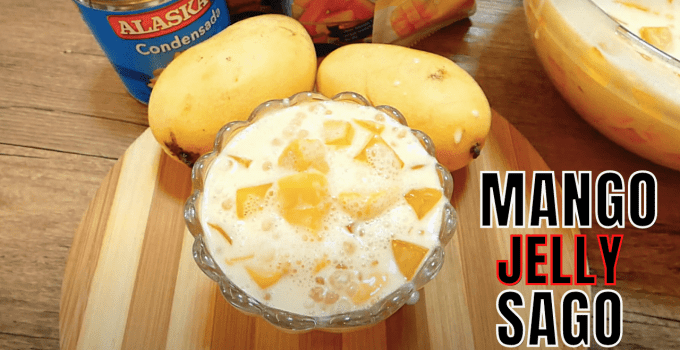 Okay, we have a recipe for you guys that features my all-time favorite fruits: mangoes! That’s right, this mango sago gulaman dessert is a Filipino dessert recipe that was my absolute favorite as a kid and even now as an adult. It’s got the fundamental properties of popular Filipino dessert recipes: the creamy sauce, the juicy sweet and colorful fruit, and the jelly texture of the gulaman (gelatin). Plus, there’s the added slightly chewy texture of the sago, which we’ll get into later.

Honestly, I can just eat mango as is. Whenever my parents purchased a batch of mangoes from the market, I was always the one responsible for consuming them all. I learned through one experience of consuming unspeakable numbers of mangoes in one sitting that it’s not really a good idea. Let’s just say that I spent a lot of time sitting on the toilet the next day (don’t ask).

So I learned my lesson: only consume mangoes in moderation. Even though the fruit is one of the most delicious foods I’ve tasted. It calls out the sweet tooth in me, even now as an adult.

I’m not sure how exactly they measured the sweetness of the mangoes but I remembered hearing that there are more sugar particles found in Philippines mangoes compared to other mango cultivars around the world. Don’t quote me on that though.

Oh, for another fun fact. Did you know that mango is the national fruit of the Philippines? I had no idea until I started doing research for this recipe post. I also found out that the clothing brand Mango will be the first results when Googling mango (which kinda irritated me for some reason).

Okaaaay. Let’s get into sago now. Sago is pure starch made from the spongy center, which is called piths, of tropical palm stems. It’s a popular food ingredient in Southeast Asia, especially in New Guinea. It can take on different forms, one being that of a pancake.

In the Philippines, it’s best recognized in the form of pearls like in the beloved Philippine snack, taho. Sago pearls are commercially distributed and can be easily cooked at home with a good boiling session. When the sago is translucent and its white center is nowhere to be found, it’s ready to be used in your recipe or stored for future use. You’ll also know when it’s ready when the pearls are chewy to eat.

Sago is also known as tapioca balls. Today, you can find sago anyplace where bubble tea is sold.

And finally, we have the gelatin or gulaman. A lot of people interchange these two names but they are slightly different. Let’s first discuss gulaman.

Gulaman is made out of a jelly substance that’s extracted from seaweed. This jelly substance is called agar which came from red algae. It originated in Japan, first discovered in 1658 by one innkeeper in Kyoto named Miro Tarozaemon. This jelly-like substance either arrived in the Philippines through trade or during the Japanese occupation during WWII.

Traditional gulaman in the Philippines desserts made out of bars from these jelly-like substances. We can also find them in various desserts like halo-halo and this mango sago gulaman.

On the other hand, gelatin is a lot older. It originated in medieval Britain during the 15th century. It’s mostly reserved for wealthy families as the first gelatin products came from cattle hooves that were boiled for a long time to produce jelly-like substances that are derived from collagen. This was a laborious and time-consuming task.

However, with modernization, gelatin can be easily cooked by purchasing commercially distributed packs. Just like gulaman, gelatin was most likely introduced to the Philippines by foreigners. This time, it’s by the invading Americans.

Compared to gulaman, gelatin is much more translucent in color. Gulaman is also a carbohydrate while gelatin is derived from collagen.

It’s quite interesting learning all these facts about the ingredients we’re using for a Filipino recipe, don’t you agree?

Now for this delicious mango sago gulaman dessert! I think this recipe has it all. The irritable sweetness of the mangoes paired with the mixture of Nestle cream, evaporated milk, and condensed milk. Plus the addicting contrast of textures given by the gelatin and the chew sago. Combine them all and once it’s chilled for an hour or two, this mango sago gulaman dessert recipe will have you coming back for more!

But remember to consume mangoes in moderation. Take it from me.

Anyway, all the ingredients for this sweet Filipino dessert recipe are all listed down below. You can find the step by step instructions on how to assemble this recipe. We also made a fun video for people who want to cook along with us which can also be watched down below. Enjoy!