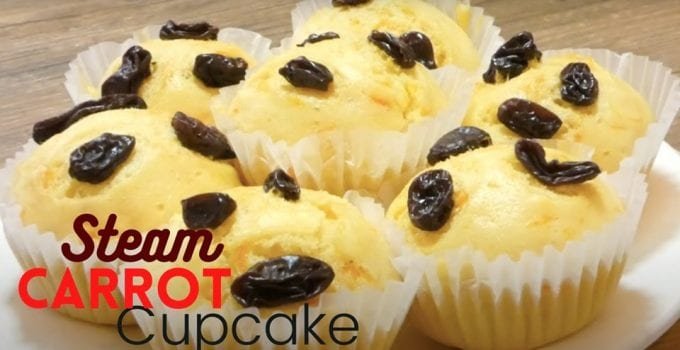 It’s been a while since we’ve made any kind of cupcakes in this here at Panlasang Pinoy Recipes. We’ve sort of made it a forte to make rice cake or kakanin recipes but rarely had we made any cupcakes. This steam carrot cupcake recipe is a Filipino recipe through and through while still being categorized as a cupcake.

That’s right, we’re going to steam this carrot cupcake recipe just like our rice cake delicacies or kakanin recipes. Most Filipinos don’t have an oven in their homes but steamers are common fixtures in the Filipino kitchen. All the better to make kakanin for miryenda.

Cupcakes are not a staple snack or recipe for me growing up. I most commonly saw them in American TV shows or movies. The only cupcake that I tried is the ones that are sold commercially in supermarkets that come in plastic packaging. And growing up, cupcakes are not commonly sold in bakeries or cafes like they are now.

The closest snack that I know of in the Philippines that greatly resembles cupcakes is mamon. It’s more technically a sponge or chiffon cake that is baked in cupcake-shaped molds. It’s fluffy and is traditionally eaten as is, without any added ingredients to the cake. Mamon is commonly sold in local bakeries and nationwide bakery chains.

Surprisingly, mamon is one of those rare Filipino recipes that are less sweet than its western counterparts because of its lack of confectionaries, sugary decorations, and toppings.

Before diving into this recipe, let’s first dive into the history of cupcakes and look at examples of Filipino cupcake recipes that are available on this site. We’re also going to look at the differences between cupcakes, muffins, rice cakes, and the little-known fairy cakes. And finally, we’re going to see how this delicious steam carrot cupcake is made.

Now, what exactly is a cupcake? Cupcakes are literally just cakes for one person to eat. It’s baked in aluminum cups or small thin baking papers. Just like with regular cakes, cupcakes are colorfully decorated with frosting, fondant, confectionaries, and toppings. It’s pretty much an entire cake, smooshed into a cup for the enjoyment of a single person.

The typical cupcake recipe uses the basic ingredients of a standard cake recipe, these include butter, sugar, eggs, and flour. Any cake recipe can be adapted into a cupcake recipe with a few modifications on the portions of the ingredients. Cupcakes bake much faster than a normal cake because of their smaller portions.

Bakers can get really creative with cupcakes. Cupcake batter can be mixed with ingredients like chocolate chips, nuts, berries, raisins, and more.  Commercial bakeries go all out with their cupcake decorations with elaborate designs, shapes, colors, and flavors. Cupcakes have also recently experienced a boost of popularity in the west because of baking shows in the media prominently featuring the pastry.

The first-ever record of cupcakes was in America in the year 1796 in a cookbook, ‘American Cookery’ by Amelia Simmons, which was first described as “a light cake to bake in small cups.” (Fun fact: American Cookery is also the very first cookbook written by an American).

It wasn’t until the 19th century in the year 1828 that the term cupcake was first used in a cookbook by Eliza Leslie titled “Seventy-five Receipts for Pastry, Cakes, and Sweetmeats.”

The earlier recorded versions of the cupcake are not the familiar sweet sugary pastries that we know and love today. There originally was no frosting on cupcakes rather they were flavored with spices and dried fruits.

It’s theorized that cupcakes were named based on the portion of the ingredients needed for the recipe, much like pound cakes. There was also evidence that cupcakes were originally called “1234 Cakes” because it was easier for bakers to remember the portions for the recipe. These portions go like this: one cup of butter, two cups of sugar, three cups of flour, four eggs, one cup of milk, and one spoonful of soda.

The exact inventor of the modern cupcake is unknown. Throughout the centuries, cupcake recipes keep evolving in home kitchens, and recipes are passed down from one generation to another. There are no exact records as recipes during the 18th century are commonly learned orally as most people, including cooks and bakers, are illiterate.

Regardless of the exact origins of the cupcake, it became a huge hit with Americans, both at home and at commercial bakeries. The very first bakery to commercially sell cupcakes was Hostess in 1919. Hostess introduced the single-sized dessert as a “snack cake” to its customers.

There is also the fact that cupcakes are far more economical to bake compared to the regular layered cake. Children also love cupcakes and they can be shared with just about anyone, making it an ideal treat for parties and birthdays, and also contributed to its huge popularity in the US.

The Americans most likely introduced cupcakes to the Philippines during the American occupation, during the 19th and 20th centuries. However, the cupcakes’ popularity in the Philippines is still in no competition with the rice cake delicacies that are native to the country.

CUPCAKES VS OTHER PASTRIES

What are the differences between a cupcake, a muffin, a rice cake, and a fairy cake? At first glance, some people may just say that they are all the same but that would be a false statement. We already defined what a cupcake is, so let’s do that with the other pastries that are mentioned and distinguish them from the cupcake.

Unlike cupcakes, which are sweet, frosting-covered desserts, muffins are typically more savory and eaten for breakfast or a filling snack. Muffins are less sugary than cupcakes and can include more whole fruits, grains, cheese, and even vegetables. Muffins are also baked using the muffin method which requires the dry and wet family ingredients to be separated in their own bowls. These two bowls are then gently combined to create the muffin batter.

To start, rice cakes are native to several Asian countries. In the Philippines, they are called kakanin. Rice cake delicacies are some of the few surviving indigenous delicacies of the Philippines that predate the Spanish colonial occupation of the country. Kakanin recipes use native ingredients with the most common one being rice or rice dough. It’s also much less sugary than cupcakes.

There is a lot of information and recipes on this site about the many different kinds of kakanin. To find out more, check out The Big Four: Top Loved Kakanin and Their Origins

If you’re not from the United Kingdom, you probably never heard of fairy cakes before. Contrary to what many may assume, fairy cakes are not fairy-themed cakes. The simplest way to describe fairy cakes is they are smaller versions of cupcakes.

It does have some distinct features. Fairy cakes traditionally have their top cut off, jam is placed, and a small amount of cream is placed on top. The top part that was cut off is further cut in half and then put back on either side of the cream. This gives it a resemblance to wings. Fairy cakes also only use glaze icing on top rather than frosting.

So finally, we come to the part where we get to learn how to make the delicious steam carrot cupcake. As stated above, we’re going to slightly deviate from the traditional way cupcakes are baked and make this carrot cupcake the Filipino way. Most of the typical ingredients for the cupcake are there. I’ve spent multiple trials on how to make this recipe with its unconventional method, some mistakes are inevitable. But I think this turned out great.

This steamed carrot recipe is light, requires minimum decoration, and the carrot flavor is deliciously evident in every bite. To learn how to make this steam carrot cupcake below is the complete list of recipes and cooking instructions on how to make this recipe at home.

We also made a fun video for you to bake alongside with. Tell us how your first batch of steam carrot cupcakes went. Enjoy!

How to Make Steam Carrot Cupcake
Save Print
Ingredients
Instructions
3.5.3251