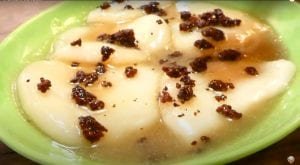 We’ve already done a palitaw recipe on this site which is a rice delicacy or kakanin in Filipino that boils a kind of special made rice dough and coated in grated coconut milk, sesame seeds, sugar. That’s the original palitaw recipe and this Filipino treats look like fluffy and soft pillows that are also deliciously sweet and light to eat.

Palitaw got its name from its cooking process. To float translates to palitaw in Filipino. I already mentioned that a type of special rice dough (which we will discuss later on how to make), is boiled in water to cook the kakanin. To find out if it’s ready, the dough floats to the surface of the boiling water and then the cook and scoop it out.

The entire cooking process of palitaw is very easy and most kids, mainly in the province, gladly volunteer to help their parents or guardians with dropping the disk-shaped dough in the boiling water (with supervision, of course) to experience that unadulterated joy out of seeing it float up to the surface.

I only got to experience creating our homemade palitaw once as a kid when a family friend from the province visited and volunteered to make palitaw at our home. I got to drop the disk-shaped dough in the boiling water and it sort of felt like watching a magic trick seeing it float up to the surface of the water. I get why so many kids love to partake in this process.

How the dough is made with the palitaw has gone through an evolution of sorts. The original recipe for the dough of this rice cake requires glutinous or sticky rice to be washed, then soaked, and grounded. The excess water is eliminated through the grinding process and the dough is then rolled into smaller individual balls and flattened out to achieve a disk-like shape.

Nowadays, a more convenient ingredient to prepare the dough comes in the form of glutinous rice flour, which has widely gained popularity and has largely replaced the original grinding process of the glutinous rice to create the dough.

However, using the original process is still used today, especially in the province and rural areas of the country.

Once the dough is created and the disk-shaped dough rose up to the surface of the boiling water, all that’s left to do is to add some flavors to the dough. The original and most ingredients for flavors used in this kakanin are grated coconut meat, sesame seeds, and sugar. This is also a popular one for entrepreneurs to packets of at markets.

Other recipes for the palitaw use a dip or sauce to add flavor like latik which is made out of a mixture of coconut milk, coconut cream, and brown sugar. This makes for a more filling snack, compared to the light and fluffy version of palitaw that uses the original recipe.

Palitaw sa latik is equally as sweet and flavorful as the original palitaw recipe but I tend to prefer this version more for my afternoon snack whenever palitaw is available. You can also add some extra flavors to it like pandan or ube if you want.

I was scrolling online and randomly found this fun and easy recipe of palitaw na latik on Pinterest. I instantly got a craving and since it was my day off, I figured why not try this one for the fun of it.

The results were great and I couldn’t be any happier. So now, I want to share this recipe of palitaw na latik on this site.

Creating the dough is quite easy as long as you have the correct ratio. Just combine the 2 cups of glutinous rice flour and 1 cup of water to form a smooth dough. Once that’s achieved, form small balls that should be a quarter-inch thick. Stretch or flatten the dough to create an oval shape. Set these aside so we can cook the latik.

So in a saucepan, pour the can of coconut cream and bring it to a boil with continuous stirring until it’s almost dry. Then turn down the heat into low still with the continuous stirring until the curds are separated from the coconut oil. Continue the process until the curds have turned brown in color but make sure they’re not burnt. Drain and set aside.

Next in another saucepan, mix the milk and brown sugar until it’s simmering and sugar is melted. Then add a pinch of salt and drop the formed palitaw in the saucepan and wait for it to float up.

Don’t remove the palitaw yet as we’re gonna add coconut cream to the saucepan and let everything simmer until the sauce we’ve created has turned slightly thick in consistency. The last thing to do is to add the cooked latik to the saucepan and then remove it from the heat.

The palitaw sa latik is ready to serve!