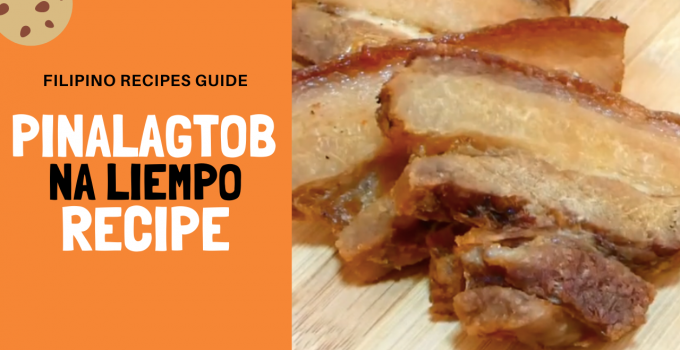 This Filipino recipe is probably one of my favorite things to cook with just how simple it is to follow. Pinalagtob na Liempo is a Filipino dish that not many people may have heard about but I heard that it’s quite a favorite dish to prepare by chefs in restaurants. It’s the perfect dish for people who love their pork but is still conscious of their health.

This Filipino dish, unlike a lot of Filipino pork dishes like lechon kawali or fried pork chop actually uses a lot of healthy herbs to cook the dish. It may not look like it at from the pictures as at first glance, it looks like any fried liempo, but pinalagtob na liempo is quite special because of its flavors.

I first encountered this dish as a young adult when I was visiting a friend in the province and that friend happened to have his brother who is a chef coming home for the weekend. After the catching and fun board games, it was time for dinner and his chef brother was the one cooking so I was really excited to see what he had in store for us.

We were all at the table dabbling in light chatter when the chef brother presented this seemingly normal looking liempo. And I honestly quite disappointed because I was expecting more from this successful chef from the city. Of course, I didn’t let it show and just brushed it off thinking that he might want to catch a break from cooking so many elaborate dishes so I didn’t complain.

To my surprise, upon my first bite of this seemingly normal liempo dish, the flavors rushed into my mouth. It was really delicious and is quite different from other liempos I’ve tried before. The rice and the dipping sauce that the chef brother also prepared perfectly complemented the flavorful pork and I remember we were drinking lemonade that meal. It was one of the best meals I had, purely because of the surprise of how flavorful the meat was.

It’s a meal fit for a restaurant.

I politely asked the chef brother how he got all the flavors in such a seemingly simple liempo dish and he generously explained the entire process. Apparently, he boiled the meat along with herbs and other flavoring ingredients so the liempo can soak up all of those delicious flavors and then deep fry the liempo when it’s dried.

It was my first time hearing of this cooking technique and I quickly got to try during the next weekend. I highly suggest giving this recipe a try, dear reader. It’s quite healthier than normal liempo dishes out there and your family will highly thank you for it upon the first bite.

Let’s get started, I went to the meat shop and brought myself 2 kls. of liempo, and the local store for 1 ginger, 1 head of garlic, 2 stalk leeks, and bay leaves which we’ll only 2 pieces of.

For seasoning, we only need salt and pepper as well as fish sauce. Of course, we’ll also gonna need water for boiling and cooking oil to deep fry the liempo.

Now for the cooking process!

Fill a pot with water and add in the pork liempo. Then add the ginger, garlic, leeks, bay leaves, salt, and pepper. Boil the water with the ingredients until the liempo is soft and tender. This is how we know that it’s ready and absorbed all the flavors.

Hand the pork liempo to dry and once it’s dry, it’s ready to deep fry in cooking oil. Deep fry the liempo until it’s turned crisp. Take it out from the oil and season it with fish sauce. I also highly recommend using fish sauce as the dip.

Chop the liempo into smaller pieces, serve hot with fluffy white rice and a small bowl of fish sauce for the dip.