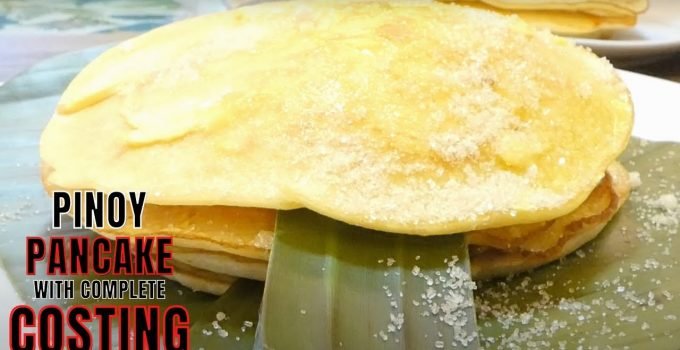 I might just devour every pancake here on the table–oh! Hey, there. We’re back with another negosyo recipe. Today’s recipe is specifically chosen because I just so happened to stumble upon a YouTube video documenting a trip to a popular restaurant chain, Pancake House.

Watching the people in the video trying out the fluffy and delicious pancakes made me experience flashbacks to my first visits there. I think it was the summer just after graduating elementary when my parents took me to the newly opened Pancake House at the local mall. At this point, I never had pancakes before as it was such an American food item, in my mind.

So, naturally, being the curious pre-teen that I was, I told the waiter that I would like one of everything. My parents just laughed at me and told the kuya waiter that I would have their classic pancake and a chocolate milkshake. I remember my dad ordering beef tapa and my mom the spaghetti.

When our orders arrived, I thought that the ball of butter on top was actually ice cream. I took a huge bite out of it and, yeah, regretted it. My parents laughed at my antics, of course. It was a good thing that the butter was pretty mild in flavor. My mom had to teach me the correct way of eating the pancake. I have to remind readers that the only exposure to pancakes is through American TV shows.

So my mom spread the now smaller ball of butter on the surface of the pancakes (I got two pieces of pancakes) and poured some syrup over the piece of pancake on my fork. I took a bite and…I thought it was okay. Not something to be excited about. Good thing I got my chocolate milkshake along with the pancake.

But I managed to finish the whole plate and by the time the table’s cleaned, I was telling my mom to order another plate of pancakes to take home. Which she refused, of course. There’s something about pancakes that creeps up on you when you’re eating and before you know it, you just want more and more.

For some reason, we rarely go back to Pancake House over the years. Probably because of it’s more Western style of food items on the menu. My household prefers more traditional Filipino dishes for meals. But we do sometimes buy packaged pancake batter from the grocery store. That was one of the first attempts of baking I ever tried at home.

That wasn’t the only time I tried pancakes, or a version of it, during my school days. During high school, hotcakes were such a popular street food with food stands waiting for students just outside the school gates. I can vividly remember the vendor pouring the hotcake batter on the hot mold to cook the pancake. It was fascinating seeing him flip it over. I always buy one for myself after class to eat for my commute home.

It’s crazy how one video can bring back memories of a food item. This actually inspired me to try and develop this negosyo recipe for the readers here because I know that there will be plenty of customers that would come back for more.

And upon researching for more info about pancakes online. I found out that there’s no one classic recipe for pancakes. There’s a diverse recipe for it from around the world with different countries often having its version of pancakes in their cuisine.

The Philippines also has its own version of pancakes called salukara originated by the Waray from Eastern Samar. It can be categorized as a type of pancake because of its flatness and it really does resemble a pancake. But I think it would more accurately be categorized with kakanin or native Filipino rice delicacies because of the use of rice flour and coconut milk like many other kakanin recipes.

There’s also something called the panyalam, a deep-fried version of pancake originating from Mindanao, also made with glutinous rice and coconut milk, along with muscovado. The Philippines also has a version of savory pancakes like pudpod made from smoked fish flakes and okoy that’s made from battered shrimp, pumpkin, and sweet potatoes.

But for this Pinoy Pancake Recipe, we’re making a classic pancake that I guarantee will satisfy anyone who takes a bite out of it.

As always with our negosyo recipes, we include a breakdown of the costs of making a batch of this recipe including the estimated earnings that one can make. That’s all included down below. We also made a fun video for readers who may want to watch how to make this Pinoy Pancake Recipe in action. Enjoy!