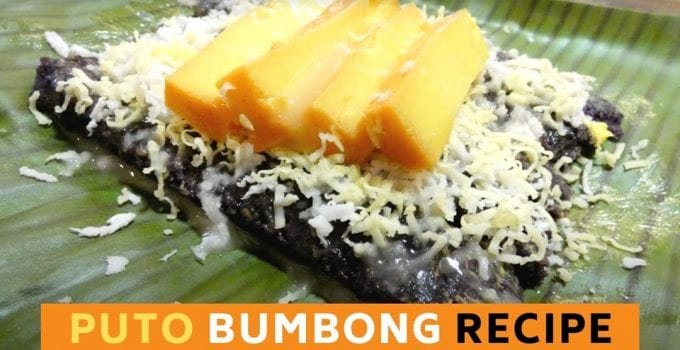 Puto Bumbong is a funky looking rice delicacy or kakanin here in the Philippines. And other than the sapin-sapin, it’s probably the most colorful Filipino recipe I’ve ever attempted on this site. It’s a very delicious kakanin and some of the best I’ve tasted after a simbang gabi but my first impression of it wasn’t that magical from its presentation alone.

I mean, the kakanin itself looks fine and perfect (the violet color looks stunning) but the shredded coconut, butter, and sugar made it looks like something accidentally spilled on it, I thought. I asked the vendor if that’s really how the puto bumbong should be presented and he said yes, which I found intriguing. Over the upcoming years of attending simbang gabi and regularly buying kakanin after, I still find the kakanin known as puto bumbong quirky looking.

Its taste is delicious though, despite its not so stellar presentation. I thought it was going to taste like ube at first but upon my first bite, it’s actually steamed glutinous rice and messy toppings of shredded coconut, butter, and sometimes sugar makes the perfect combination for this type of kakanin.

Upon researching recipes to replicate to create my own puto bumbong for this site, I came to find that the original puto bumbong recipe doesn’t fully use the common glutinous rice at all but an heirloom variety of glutinous rice called pirurutong or tapol in the Visayan language.

Why is this? Well, I came to find out the pirurutong is a rice variety that is endangered, unfortunately, so coming across it is quite rare nowadays, and if you are lucky enough to find it at your local market or supermarket, it can get quite expensive compared to the total of ordinary glutinous rice and violet food coloring.

In the original recipe, the pirurutong was mixed with the ordinary glutinous rice at a larger ratio for steaming, ordinary non-sticky rice can also be used if you want a less chewy consistency. The mixture is then soaked in saltwater overnight–ordinary will also do. This soaking process will give the kakanin a sort of fermented or acidic aftertaste.

The mixture is then drained completely and packed tightly into a bamboo tube who’s insides were greased with coconut oil (modern recipes will use either butter or margarine to grease the insides of the bamboo tube) and steamed. This results in the cylinder-shaped violet kakanin that is puto bumbong. The only thing left is to generously top it with shredded coconut, sugar, and butter.

The vendors will usually steam the rice mixtures right at the sides of churches at the side of the street outside of churches. It’s one of the most common kakanin to eat, along with bibingka, during the Christmas season, especially after midnight mass or simbang gabi.

That’s the original recipe, for my recipe of puto bumbong, I, unfortunately, won’t be using the pirurutong glutinous rice. I looked high and low for this rice variety but my search was unsuccessful. Instead, I’ll be cooking with the more modern ingredients for cooking puto bumbong, ordinary glutinous rice with a mixture of regular non-sticky rice.

I soak these two rice varieties in salt water along with violet food coloring for an hour. Got the rice mixture out of the water and let them dry overnight in a flour sack. To help further squeeze out the water from the rice mixture, I put something heavy on the floor sack it’ll be ready for cooking the following morning.

I also got myself three bamboo tubes (bumbong) to put the rice mixture in and a lansungan that’s specifically made for steaming bamboo tubes. You can use an ordinary steamer for this but I’m predicting it would be tricky to properly get the rice inside the bamboo tubes cooked.

I liked the result which is a cylinder-shaped violet sticky rice cake. All that’s left to do is top it with coconut shreds and sugar before serving. It’s a delicious rice delicacy although, I’m still looking forward to when I’ll be using the traditional pirurutong rice variety for this recipe.