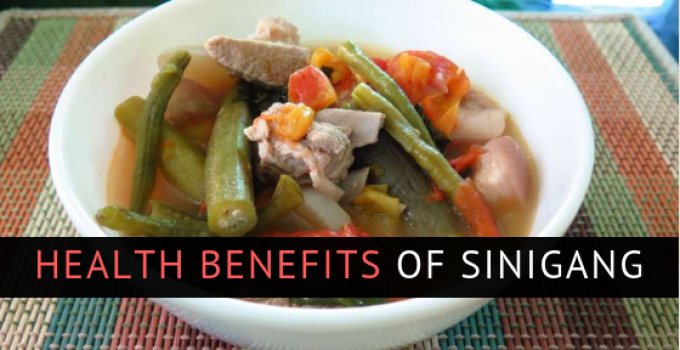 Sinigang, The No. 1 Traditional Filipino Dish

Here are few of the phrases that the top-loved Filipino cuisine, ‘Sinigang’ had been attached with ever since it has been made known- through seemingly already innumerable generations of Filipinos, who for the record, have all been a witness of the glory of this ‘traditional’ food.

So basically, what a Sinigang really is? Describing what Sinigang is, is like defining what peak of goodness is in terms of your ‘Panlasang Pinoy’ as the medium of language- but yeah, let’s still try… hmm, what about “a steaming sour broth that is emblematic to the identity of Filipinos in every sip?” Is there anyone who does not agree? Yes, I can see no hands raised, as expected. You see, Sinigang can’t be appraised as the Filipino’s No. 1 traditional dish without enough reason(s)- and what specifically are those reasons? You may be familiar with what are those but for specification concerns, for you, they will all be individually identified below.

Sinigang undeniably is a paradox of goodness as if consuming it is a sin yet is as wholesome that sense of ‘home’ is assured after finishing every bowl of it.

The recognition of this best traditional food isn’t only a claim passed through mouths (and even guts) of the Filipino people. In fact, there are different official cuisine/culture awarding bodies which have acknowledged Sinigang and placed it in the highest position in the pantheon of Pinoy dishes- exactly just as what it deserves. Few among the said bodies are one of the top publication nationwide- The Philippine STAR alongside with Unilever Food Solutions under its movement named as “Sooo Pinoy”- featuring how “rich and flavorful” are the different cuisines hailed as a pride of the country. In this selection aimed to pursue the appreciation to the ‘bountiful kitchen-centered-culture’ of the Pinoy’s bounty, Sinigang has been selected by the panel consisting of not only food experts such as chefs and food critics, but as well as, people experts such as journalists and bloggers.

Furthermore, because of the many versions of Sinigang- it would not be possible to identify a single variation as the ‘best’ kind of it- yet, on the other hand, we can identify “how” Sinigang could be best served. *Drum rolls… what else other than when it is hot? (No reader, you’re not allowed to do eye rolls) Kidding aside, Sinigang served hot is the best way it can be served simply because just like everything else… but not like anything else.

Well, every dish is best served when they’re still smoking and a courageous act of sip seconds earlier when it should most probably sear your tongue just like everything else. At the same time, Sinigang served hot is not like anything else because there’s nothing else on the list which could ever equate the sea of possibilities that consuming this dish on that state could lead its ‘patrons’. Imagine a sour broth which could be modified in your own likings- whether with a sawsawan or an additional chili on the side- yet still, maintain the identity that it has!

One more thing, however you wanted to prepare this ever-loved Sinigang – keep in mind the rule: “If as a soup, make it flavorful; if as a main dish, make it meatier.”

Again, as we’ve already talked about- there is no singular kind of Sinigang which could be claimed as the “authentic” one… but there is a kind of Sinigang which we could call as the “original” one. With the term original used- assuming that it pertains to the identification of ‘first’ form which the dish has been prepared and NOT to bring down others with the use of possible arising logic that they are ‘less original’. (Nope, Brenda. That is not how things work here.)

Going back, this Sinigang that we are talking about is that Sinigang which uses tamarind (sampalok) as its main souring agent- usually, this is practiced within the region of Tagalogs. Nonetheless, this original Sinigang uses pork as the meat alongside the said ‘asim-kilig’ agent. Oh, talking about pork, aside from Sinigang, maybe you would like to prepare another pork dish alongside, it’ll be perfect!

Despite this, we should keep in mind that what Sinigang really is and does mean- which then is it is any type of meat or even seafood (And oh, looking for a pork dish with seafood theme? We’ve got a surprise for you!) basically prepared within a sour broth- with similarity, but at the same time is distinct from another loved Filipino dish, Paksiw.

The use of tamarind, however, as time passes by, had been replaced with the use of an artificial form of flavorings in cubes and in powder. Although souring agent in this form is inevitably more convenient and could even provide the preferred level of sour concentration, still, nothing beats the natural and the original. Nonetheless, it’s still Sinigang at the end… changes may have been made at a certain degree, it’s still the Filipinos’ No. 1 Favorite (if not even more!).

The History of Sinigang

Looking at its etymology, Sinigang is basically a term used to describe a stewed form of a dish. More importantly, the term Sinigang is formulated by the Tagalogs- which obviously gives us the idea that it is these people who have first cultivated the now rich and diverse identity of this well-loved Tatak-Pinoy cuisine.

Also, with the Tagalog giving birth to what is ‘usually’ called as Sinigang, we could expect that the many different variations of this soup other than what it is generally ‘assumed’ to be, are the variations which the Visayans and Mindanaoans have put into life. Nonetheless, whether it is the Sinigang of the Tagalogs, or those from the latter stated, the use of Patis or fish sauce is well-utilized in the enhancement of both the sets from the 3 main hierarchy of version-birth-giving regions.

The biggest challenge when it comes to tracing back the history of Sinigang is that in contrary to how rich the variation of this food is, there exist no significant records distinctly identifying the basic information that is in relation to it. All that’s left to us is the knowledge that Sinigang has existed long enough that it could be tagged as ‘indigenous’.

“Why indigenous by the way?”

Well, it simply means that this top Filipino dish has existed way before the colonization of Spaniards- oh, how richer the Filipino culture truly would be if only not these ‘bangus’ came and interrupted the cultivation and spontaneous growth of the many aspects which ensembles our identity.

Anyway, that’s for us to set aside for now. Despite the said, there are still writings which prove the existence of this dish in our history- one is among one of the two most popular novels of Jose Rizal, which is Noli Me Tangere, and another is on the writing of a female war veteran, Milagros Enriquez’ book entitled as “Kasaysayan ng Kalutong Bayan”.

Because of the sour nature of this food, this is not only consumed for the gusto that it offers but as well as, because it could be effective for the treatment of one’s sore throat, and at times, even cold. Hah, can its closest competitor Adobo do the same? I doubt so.

Ever since Sinigang hasn’t only been that well-loved dish because of how it fulfills someone’s cravings per se. More importantly, Sinigang has been hailed and appraised in the same way as it is now because of how it has actually connected Filipino people through ages- starting from in between families up to a group of families forming communities, through its inexplicable goodness. That is exactly the reason why it is also known as Sunday’s favorite- because Sunday is obviously the day dedicated for ’Family Time’ and Sinigang is just the perfect dish that is surely on top-list of every member’s preferred dish to be served. All throughout history, Sinigang has served as the unbreakable tie which has connected our ancestors’ hearts not only to each other but as well as, towards us.

As it has already been stated, nowadays, artificial souring agents in the forms of powder flavoring and tamarind bouillon cubes are now much preferred. The reason behind the claim that the use of the two is much convenient than processing tamarind is because of the following: Preparation of tamarind includes a 2-step that is both time and patience consuming- first, you will put the tamarind fruit in a boiling water until the shell comes off and afterward, you would soak this opened fruit in a water (that of which only is the part that would provide the sour flavor).

For now, the history of Sinigang may not have much story to tell- but the present in addition to the future it will make along with the Filipino culture will surely build a groundbreaking story in tomorrow’s time.

The different types of Sinigang could either be a result of the distinction in the souring agent used or is due to the kind of either meat or the seafood used.

In accordance with the said, here are the different types of Sinigang based on the native ingredient which is used for its sourness:

On the other hand, here are the different types of Sinigang based on the native ingredient which is used for its sourness:

Other than the souring agents and the meats or seafood used for creating the different types of Sinigang, herein also is a list of the additional vegetables that are combined with our featured dish:

Moreover, because Sinigang’s modification is ever developmental, aside from the stated veggies above, spinach and Chinese long beans(which is clearly not usually assumed to be an ingredient of the kind of Sinigang that comes to our mind whenever the word is heard) is also placed in the pot nowadays.

Moreover, there is also variation in how they call their Sinigang-derived dish- “Masak Singgang” for those living in Northern Malaysia like Pahang, Terengganu or Kelantan and “Masak Pindang” for those in the southern part.

This cuisine is basically made up of the following:

Mackerel (ikan kembung), red chillies, turmeric, tamarind peels, and lemongrass (bold for putting emphasis on how it is just like ours)

So, Why Filipinos Love Sinigang?

At the end of it all, despite the fact that we know we love Sinigang, when asked why we love it and why it is ‘that’ popular among Filipinos (especially among their guts), here are some of the answers you can use, tuned with all the pride that there is in you.