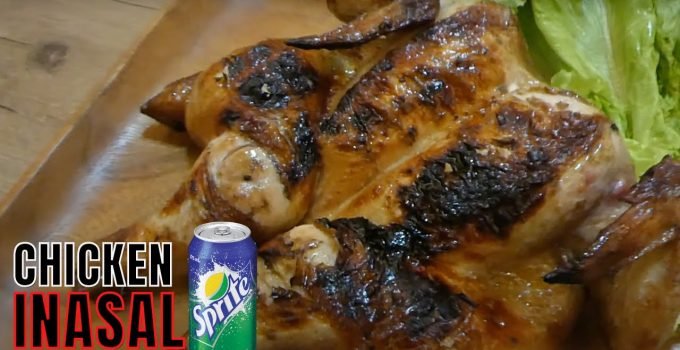 We’re doing something a little different today, ingredients-wise. You’ve probably already heard of Chicken Inasal, a staple Filipino recipe found throughout the Philippines. Well, we’re going to do a version of that and not just with individual chicken parts, but with the whole chicken.

That’s right. The whole chicken. We’re well into the ber months and you know what that means. The holidays! So I was trying to think of something new in terms of holiday recipes. The Noche Buena Feast is a huge deal here in the Philippines where Filipino households bring out their best dishes on the table to feed a whole army.

With the global health crisis still in place, I think that this year’s Noche Buena feast is going to be a lot less crowded. However, typical Filipino households often have huge families living in a single compound or house so I think the feast is still on the menu.

So, chicken inasal doesn’t necessarily belong to a traditional Filipino Noche Buena Feast. But I thought this can be a great substitute for the more traditional lechon and even lechon manok. The whole family can join in and share the whole chicken inasal.

This special whole chicken inasal doesn’t follow the traditional recipe though. Wait, let me pull back a little.

The process of cooking chicken inasal is often a straightforward process with an established set of ingredients that helps result in its delicious flavor profile. Chicken cuts (usually the thighs and breasts) are usually marinated in a mixture of calamansi juice, pepper, coconut vinegar, and annatto. Once the chicken cuts are amply marinated, usually overnight, it’s then cooked on a grill over hot coal frequently basted with the marinade.

The result is a delicious piece of chicken with a red hue ready to eat with fluffy white rice. There are also dipping sauces involved with the traditional chicken inasal recipe, like with most everyday Filipino dishes. Everyone has a version of it that they especially like.

But with my recipe, we’re not going to use annatto so that red hue will be gone. Instead, we’re largely going to use a different set of ingredients for the marinate we’re going to use on our whole chicken.

The ingredients that we’re keeping are pepper, garlic, and vinegar. Plus the chicken, of course. What we’re going to add are knorr seasoning liquid, chili labuyo, ginger, stalk lemongrass, sugar, and (believe it or not) 500ml of Sprite.

This will elevate the flavor profile of the traditional chicken inasal that would need minimal dipping sauce when eaten. It’s also a lot sweeter and hotter with some acidity in its flavors. I love it!

Once again, we’re going to use a whole chicken with this special inasal recipe. Mix all of the marinating ingredients in a big enough container and gently place the whole chicken in it and spread the marinate all over. Don’t forget to poke some pockets into it for the flavors to penetrate deeper. It’s also not a bad idea to give the chicken a little massage while splashing it in the marinade mixture.

Of course, it’s up to you if you want to use a whole chicken or cuts of chicken parts. This recipe will work with either one. But for the sake of doing something grand as an idea for the Noche Buena feast, we’re going to be using a whole chicken here.

Marinate that whole chicken overnight in the fridge and cook it on a grill over hot coal the next day. Of course, baste it with the remaining marinade mixture while it’s cooking.

Once it’s ready, it’s time for a mini feast! Check out this special buong manok chicken inasal recipe below to recreate it in your kitchen.

We also made a fun video for you to watch if you want to see the step by step process on how to prepare this delicious chicken inasal recipe. Enjoy!