Lomi is a special Filipino noodle soup that practically every Filipino has tried, at least once in their life. Its origins can be traced back to when the ancient tribes of the Philippines traded with Chinese merchants. The rich and thick broth with the chewy thick noodles and its different variations of meat and toppings is very popular throughout the country in modern times. Each region has its own variety of the lomi recipe.

There’s sort of a special feeling whenever I’m eating lomi. I guess I can say that it easily belongs to the list of ultimate comfort Filipino recipes but in the dish is much more accessible to eat. Almost every carenderia or restaurant specializing in Filipino cuisine has it on their menu and most likely than not, their lomi recipe becomes their star dish.

Filipinos love to eat lomi, sometimes on a weekly basis. The perfect day to eat lomi is one that’s cold and rainy. The thick warm broth along with the chewy noodles serves as a great energy booster and is very filling to the stomach. Lomi can be eaten during any type of weather thou, Filipinos love to eat it as an afternoon snack or for dinner. And it’s in high demand during the monsoon season.

Like I said, lomi recipes vary depending on which region you’re on in the Philippines and some recipes from certain regions stand out from the many variations of lomi recipes. On the top of my head, the lomi from Batangas in the region of Calabarzon is always a desired treat by many Filipinos throughout the country. I always need to have one whenever I’m visiting the Batangas and I often considered my trip to Batangas as incomplete without having to try its lomi recipe. Many restaurants in the city became popular for their lomi alone.

Normally, lomi would be made up of their signature thick miki noodles, rich thick broth, a choice of vegetables, cuts of meat, and sometimes some slices of boiled egg on top. The popular Batangas lomi do without all of those except for the miki noodles, cuts of meat, and a super thick and rich broth. If there were any vegetables present, the Batangueno lomi recipe just have slices of onion leeks on top but rarely. Its result is an extra hearty noodle soup that fits perfectly with the Filipino palate.

Not to say that the other lomi recipes from other regions are inferior, each one of them has their own special twist to the lomi recipe that’s unique. The Batangueno lomi recipe just

has such a memorable taste that it got imprinted in my palate and left such a strong impression.

So, being the curious person that I am, I strived to make my own special lomi recipe. It’s not quite the same as the Batangueno’s lomi recipe but mine does take inspiration from it along with other lomi recipes I tried from other regions. I would best descript this special lomi recipe land meets the sea or something to that effect.

Of course, the no lomi recipe would be complete without the star of the dish, the thick miki noodles. These miki noodles are made are the standard noodles used in lomi recipes and they’re basically thick egg noodles soaked in lye water during their making process. This gives the noodles its thick shape and chewy texture.

Other ingredients that I’ll use are thinly sliced lean pork, pork liver, also thinly sliced, clean and sliced fresh squids, and small shrimps that are shelled with their heads set aside for later use. I bought some squid balls, orlians, chicken balls, and fish balls but can be optional to use in this special lomi recipe.

I’ll also be incorporating vegetables in the recipe to give it a more dynamic texture, taste, and added nutrients. These are julienned carrots, snow peas with their ends trimmed, and minced garlic and onion. Let’s not forget the broth which I basically made with 100 grams of chicken soup pack or chicken stock along with one egg.

The cooking process of this special lomi recipe is easy to follow but can be considered a long process. If you have all the ingredients needed in this recipe, carefully follow the instructions below to achieve this great special lomi. Once you’re done cooking the special lomi, serve immediately and you can serve it with a side plate of calamansi juice, fried garlic, slices of spring onion, and patis or fish sauce to bring out the flavors a little more.

I love the thickness of the broth and the miki noodles. Perfectly cooked, the combination of the meat, vegetables, squid, and shrimp creates the perfect balance of flavors that packs a strong punch. I hope you’ll enjoy this recipe as well. 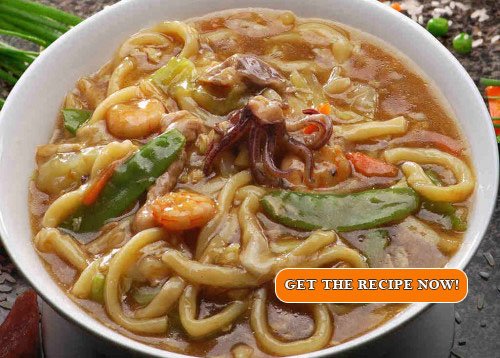