Home
Blog
The Best 13 Sisig Recipes Available in the Philippines 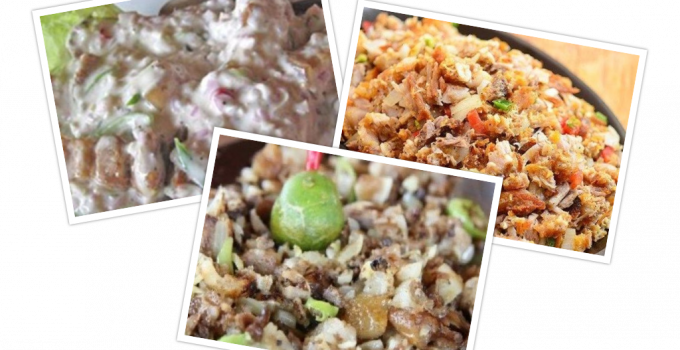 Plain and simple, the original sisig recipe is made of pork cheeks and pig brain leftover from a lechon; a whole roasted pig. Although nowadays, more convenient pork parts are often used and pig brain is replaced by chicken liver or liver spread. The original Filipino recipe shows the creativity of Filipinos by using what resources they have available and turning it into a delicious dish.

This original Filipino recipe was first recorded in the 1700s in Pampanga and was described by an Augustinian priest to be a salad made up of green papaya and green guava with a dressing of salt, pepper, garlic, vinegar. It was originally a remedy for hangovers. The name sisig came from an old kapangpangan term sisigan, which means “to make sour.”

The Filipino dish evolved to incorporate meat in the recipe during the American occupation. Leftover pig’s meat from lechon is boiled, chopped and added to the mixture of ingredients and evolved to be the salty, sour and deliciously meaty dish we know as sisig today.

The modern sisig recipe was invented by an old lady named Lucia Cunanan or Aling Lucing. Her sisig recipe quickly gained popularity in Angeles City and even revolutionized the city’s dining industry. Aling Lucing popularized sisig in her city so much to the point that it was hailed as the Sisig Capital of the Philippines and inspired a festival in its honor.

Aling Lucing, unfortunately, passed in a tragic incident in her home in 2008 but her legacy continues on in her city and all over the Philippines where sisig is made.

To help remember Aling Lucing’s legacy, here is a list of the best sisig recipe:

The classic pork sisig is the tried and tested sisig recipe that all Filipinos know. It’s the favorite pulutan recipe and can be found at the menu of almost every Filipino restaurant out there.

The recipe uses the original ingredients of pork cheeks and pig brain (or chicken liver if you don’t want to eat brain), chopped, boiled, and added in a mixture of crushed garlic, pepper, soy sauce, and calamansi to marinate. Everything is grilled and served with a topping of raw egg and some calamansi juice.

Crispy pork sisig is a modified recipe of the classic pork sisig for those who find it squeamish to eat pig’s innards. This recipe will produce a dryer, crispier version of the classic sisig but still as delicious and meaty.

Of course, the pig’s brain isn’t included in this recipe and the pig’s cheek as well. The meat used is an already cooked Lechon Kawali that has to be chopped. The chopped lechon kawali is then tossed in a pan with the rest of the ingredients and served extra crunchy.

Fish sisig is the slightly healthier version of the classic pork sisig. The fish gives this version of sisig a saltier taste. It’s a great alternative sisig recipe for those who also don’t like pork.

Any fish can be used in this recipe but typically tuna and milkfish are preferred. The fist of choice is fried in a pan until it’s crisp and golden brown. Afterwhich, the fish should be flaked into small pieces and mixed in a bowl with the other ingredients. This creates the delicious and healthy fish sisig.

For those who love seafood and squid, pusit sisig or squid sisig recipe is a must try. It’s prepared the same way as any sisig recipe except the pork is replaced by squeed rings. The squeed rings are stirfried in the ingredients to make the delicious pusit sisig.

But first the squid must be grilled and seared then cut into rings. The rings are then sauteed in a pan with garlic and onions to bring out its flavors. Other ingredients are then added to serve as garnishes and dressing like chopped tomatoes, onion rings, mayonnaise, spiced vinegar, mustard, etc.

This pork sisig recipe is slightly different from the favorite classic pork sisig that’s also grilled. What differentiates this grilled pork sisig recipe to the classic are the ingredients and the cooking method. The pork is grilled first then chopped into small pieces. The chopped pork is added to a mixture of mayonnaise, fish sauce, and lemon then microwaved instead of grilled like the traditional way. The finished product is topped off with a fried egg, chili, and onions.

Sisig Kapampangan recipe is the nearest sisig recipe to Aling Lucing’s cooked back in her hole in a wall establishment. This recipe embodies the sisig that Angeles city loves and holds with pride. The ingredients used are the classic ones to create the sisig kapampangan that has a festival dedicated to its legacy and impact on the city’s culture and economy.

Sisig Kapampangan uses every part of the pig’s head, grill them, and boil them before sauteing the pork with the rest of the ingredients.

Beef sisig from the name alone uses beef instead of pork as the meat in the sisig recipe. The dish also incorporates a pig or cow’s brain into the recipe. The dish is similarly prepared as any sisig recipes are prepared. The beef is first boiled to get rid of any remaining hairs then grilled or broiled until crispen.

The cooked meat is then added to a mixture of the other ingredients or marinated along with the innards. It’s best served in a sizzling platter then topped off with raw egg and extracts of calamansi juice.

Sisig Wrap is a fun thing to do when you want a less greasy sisig. It’s a great dish to munch on as well if you’re feeling like you don’t want to bother with a sizzling plate. Sisig wrap is basically like a tortilla except the filling is entirely made of pork sisig.

The pork liempo is first boiled and fried until crisped then chopped into small pieces. It’s then mixed with the other ingredients and mayonnaise is used to hold it all together. The tortilla wrap should then be spread with flour before adding in the sisig.

Tofu sisig is the vegan alternative of the classic sisig recipe. It’s also probably the healthiest sisig version out there. The tofu is commonly referred to as tokwa and is sometimes called as tokwa’t baboy when it serves as an alternative to pork in dishes like pork sisig.

As it isn’t any obvious enough, tofu is served in traditional sisig mixture instead of pork or any other types of meat. Pig innards like their brain or liver are sometimes incorporated but can be entirely excluded to make this dish truly vegan and a healthier alternative to the classic sisig dish.

Sisig Matua is probably the first sisig recipe that Aling Lucing first introduced in her restaurant. The process of cooking sisig matua is no different than cooking any other sisig recipes. The simplicity of it created the standard sisig recipe that many Filipinos love today.

The only difference is that there is an abundance of maskara or the skin of the pig’s face is used in this recipe instead of the more popular pork cheeks and ears. The maskara is first boiled then further cooked by grilling or broiling before being mixed with the rest of the ingredients.

See also: 10 Pinoy Pork Dishes and Their Place of Origin

This recipe is a variant of the fish sisig recipe mentioned above. But this time tuna is the main protein except for milkfish. The main ingredient of this recipe is much more convenient to find because you can go to your local supermarket and buy their canned tuna to cook in this recipe. But if you have the budget, you can go to your local market place and buy fish tuna from there. The fresher fish is much more delicious and healthier.

For those who want to get a taste that combines the flavors of the sea and the fresh ingredients the land has to offer, then oyster sisig is a great dish that you must try. It’s a fancier version of the sisig recipe that is probably the newest sisig recipe that has been popularized. It’s prepared the same way as the classic sisig recipe but they use oysters instead of pork. The oysters need to be abundant in the dish to create a perfect mixture with the rest of the ingredients.

Although this dish doesn’t have the word sisig on it, its recipe and ingredients still embody the classic sisig recipe made Kapampangan style. Pork is also heavily used and even their maskara. Pig’s brain is also a common ingredient of the dinakdakan recipe.

This recipe is considered to be the Ilocano’s version of sisig and is prepared the same way as the original recipe. What distinguishes it from the original Kapampangan version recipe is that dinakdakan uses the entire pig’s head and its innards except for the bones.