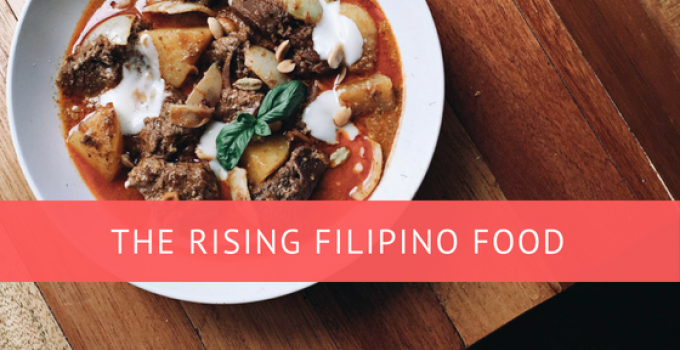 Do you know Andrew Zimmern, the host of Bizarre Foods with Andrew Zimmern? In 2012, this man predicted that Filipino food will be the next big thing. Would you believe that?! Our very own kind of food may be the next popular one worldwide! Why did he think so? He said that it was “simply because of the variety of ingredients and European techniques that are found in that food.”

With the increasing number of Filipino restaurants and fastfood chain (especially Jollibee) being established worldwide, we can definitely say that our food is going somewhere. It is indeed going global. Why not? It is full of history and flavor of course. Our food is a rich tapestry of different cultures-Spanish, Western, Japanese, Chinese, and our precolonial way of cooking. Our flavors can even indicate our history as a nation. Our food is also made of cuisines from about 144 distinct ethno-linguistic groups present throughout the Philippines archipelago. Can you imagine the diversity of our food?

In early 2017, Bloomberg reported that Google searches for “Filipino food” have doubled since 2012. Additionally, entries for “lumpia near me” have increased by 3, 350 percent! In 2016, Bon Appétit made Filipino restaurant Bad Saint in Washington, D.C., number two on its annual America’s Best New Restaurants list. This is because the restaurant had started attracting diners show want a taste of adobong dilaw or vigan empanadas stuffed with beef, egg, and bean sprouts. Many eateries like this have been making names not just in the Philippines, but in many parts of the United States. In New York, Cendrillon and Purple Yam are being known for their Pinoy food. And do you know that in Los Angeles, a film called Ulam was screened? This film is a meditation on Filipino cooking in America according to Vogue. It was screened as part of Los Angeles Times food critic Jonathan Gold’s Food Bowl food festival. Wow! That is really something for Pinoy food! So what is really in it?

As said, our food is a kind of fusion-the good kind of it. Filipino dishes may range simply from a fried salted fish or tuyo and rice to more complex ones, such as paella. Have you tried having tuyo for breakfast? Simple but very heartwarming. Similar to other Asian countries, rice is staple to Filipinos-breakfast, lunch, dinner and even snacks or merienda! A meal without a rice is not a meal, they say. Rice is always coupled with a dish or what we call an ulam, whether it is vegetables, seafood, or meat-based dish. How do we eat as Filipinos? Although we use spoon and fork, we commonly use the “kamayan” system, that is, we use our bare hands in eating. Yum!

How diverse really is our food? Ask a Filipino from every region, and you will discover no same method of cooking adobo. Just that one famous dish adobo. Each region or even province can cook it in different ways-adobong puti (white adobo), adobong itim (black adobo), adobo sa gata (adobo cooked with coconut milk), or adobong dilaw to name a few. Adobo is actually a Spanish term meaning to marinade but the dish is purely Filipino. We have long been using vinegar in preserving and cooking food even before the Spanish came in. It is a common Filipino condiment. How about the other food? How diverse can it be? It is not just about balut or boiled duck embryo that we can be known for. Aside from adobo, our popular dishes include the known lechon or roasted pig (who doesn’t love this?!), longganisa (commonly served during breakfast), kaldereta, mechado, puchero, afritada, kare-kare (oxtail stew), pinakbet, crispy pata, sisig (pig’s face and ears boiled, grilled, chopped, and mixed with liver, salt, pepper, onions, and calamansi juice), pancit, lumpia, dinuguan (stew of pork offal and pig blood) and sinigang (By the way, adobo and sinigang are vying for being the national dish). In these food, you can already note the influences that these dishes have. Sinigang is a hot and sour soup that commonly uses pork or fish as the main ingredient and unripe tamarind as its base; it also has green leafy vegetables, such as water spinach. Kaldereta recipes, mechado recipe, puchero, and afritada,  are almost similar to one another, but they are really different dishes. You will find out more in our future blogs. Pinakbet is made from mixed vegetables steamed in fish or shrimp sauce; this is from the northern region of the country.

We also have our breakfast meals that are known to Filipinos as silog meals. Basically, it means sinangag (fried garlic rice) and itlog (eggs). You will find many stall selling silog meals not just in the morning but throughout the day. Why? They are healthy yet affordable. Garlic rice and eggs are staple. But there are other meat that can be the main dish. It includes tapa or beef marinated in soy sauce and garlic, longganisa, tocino ( sweet pork), or daing na bangus (milkfish marinated in garlic, vinegar, and spices). Heavy breakfast it is. But you can opt to have the lighter one-pandesal and coffee! Very satisfying! Pandesal is the best morning bread from bakeries. We are just on the breakfast list? We have a long way to go. Street food, birthday party dishes, merienda dishes, pulutan, pastries, and a lot more!

So what are the influences of our variety of food? During pre-Hispanic era, traditional Filipino cooking only involves boiling, grilling, and roasting. With the colonization, it has evolved a lot, with the dominance of Spanish influence. Our first influence is those Austronesians who brought knowledge about rice farming and other farming practices, which help us in increasing the number of ingredients we can use for cooking. With the trading between China and Philippines, the Chinese brought in soy sauce or toyo, noodles, tokwa or tofu, patis or fish sauce, as well as the method of frying and stir frying and making savory soup bases. The Spanish brought in the tomatoes, corn, and potatoes, as well as onions and garlic. They said that 80% of Filipino dishes can be traced to Spain. They also brought in Mexican food influences with the trade in Mexico. And where did that Spam in our sandwich come from? From the Americans; it is a symbol of the American influence during World War II. Burgers, pies, salads, fried chickens, steaks are also from the Americans. They also introduced convenient cooking with pressure cooker, microwave oven, and precooking.

Many dishes from the southern part of the Philippines are known for the use of chili and coconut milk, which is similar to Indian, Malay, and Thai food. Nevertheless, unlike other neighboring countries, most Filipinos do not eat so much of spicy dishes. Trading with Malacca also brought in bagoong. Dishes from India, such as puto, were also introduced.

This is just a bit history of how Filipino cooking and dishes came to be. Despite these influences, Pinoy food is still characteristically ours. The mixture made a unique blend that is truly Filipino. In general, our food is a combination of sweet (matamis, sour (maasim), and salty (maalat). And you can attest to the kind of flavor that it has. Our food is delicious. It is extraordinary. That is why other nationalities are becoming more curious with it. You will see foreigners dining with locals in many tourist spots in the Philippines. They want to know. They want a taste of it.

Filipino food is indeed emerging. It is set to take the center stage of worldwide market. Want to know more about our food? Our site will try to provide further interesting information in our coming blogs. Stay tuned!