Another dessert salad on the list! Yes, we now have this buko pandan salad. How does it differ from our buko salad? Well, first, you have this thing called pandan leaf. Second, other than buko, there should be no other fruit in this dessert, except when you add kaong (which is included in this recipe). Kaong is a kind of palm fruit commonly used in sweets.

Have you heard of pandan before? Of course you have probably heard about it when you were young. But have you personally seen one? It is an upright, green plant with fan-shaped sprays of long, narrow, blade-like leaves. I have seen it being used when cooking rice and bilo-bilo in our hometown. Very good smell, I should say. Pandan is a tropical plant that is widely used in cooking as flavoring. The characteristic aroma is caused by the aroma compound 2-acetyl-1-pyrroline. The same compound gives jasmine rice its typical smell.

In this recipe, pandan is used mainly for such aroma. You will boil the leaves for about 20 mins. Afterward, you will add the gulaman bars. When boiling the leaves, they should be individually twisted. Why? Twisting will break the fibers and expose the juice. During addition of gulaman, you have to make sure that the pandan leaves are removed. We just need the juice, the aroma. Gulaman is the dried agar used to make jelly-like desserts. Green-colored gulaman is used to represent the pandan leaf color. What binds all of the ingredients? Our cream and condensed milk. Heavenly!

Similar to buko salad, this buko pandan salad is commonly found in fiestas and other Filipino occasions. This is a “cheaper” version of buko salad, with the absence of fruits. Do not hesitate. Try this recipe now. 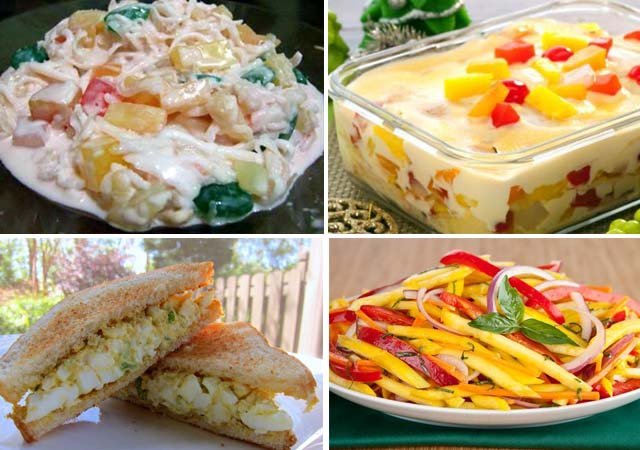