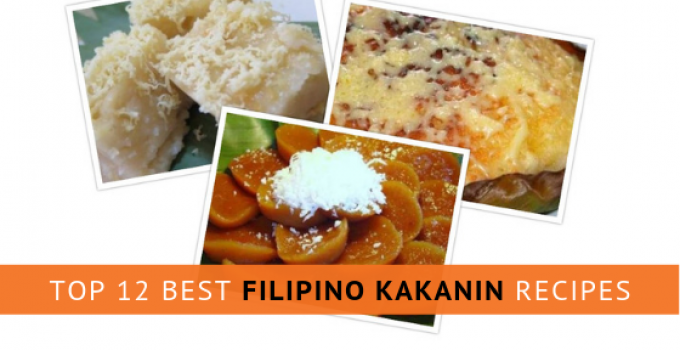 Filipino kakanins are traditional Filipino dishes that are considered delicacies whose main ingredients are either rice or root crops. These delicacies are commonly sold in outdoor markets, sukis, or by vendors along busy streets in the main centers of the Philippines. Filipinos love to eat these kakanins for meryenda as they serve as a quick and easy snack that is filling to the stomach at the same time. Kakanins are especially popular around the Christmas season with families serving kakanins by the platters for their guests to consume.

The word kanin in kakanin literally translates to rice which is a perfect description of these bite-sized snacks. Kakanins are often sold as chewy rice cakes on the streets that Filipinos can eat on their way to their destination. The kakanin flavors are usually sweetened by sugar. The presentation is often colorful or wrapped in banana leaves for a delicious bite-sized snack inside. There are different types of kakanin in the Philippines with Filipinos having their personal favorites.

We Filipinos have been coming up with original kakanin recipes and enjoying them since pre-colonial times with evidence of our ancestors offering kakanin wrapped in banana leaves or palm leaves to pre-colonial gods. Even when the Spaniards came to our shores, the kakanin’s popularity did not fade and up to this day, it’s a much-beloved snack enjoyed by young and old alike. So without further ado, let’s get on to the main topic of this article.

Probably the most popular kakanin on this list. Puto is a steamed rice cake traditionally white in color with topping such as cheese or salted egg to add extra flavor to the kakanin. Puto is also popularly eaten dipped in Filipino main dishes like dinuguan. Nowadays, there are many variations in the puto recipe with different regions of the Philippines having their version of puto that is named after the location or the main distinguishing feature of the puto product. It also comes in various delicious flavors that turn it into different colors like purple if it’s made out of ube or pandan. Check out this Puto Pao Recipe and Banana Puto Recipe.

Biko is a rice cake kakanin that is popularly served during festivals, birthdays, weddings, Christmas, new years, and special occasions in general. It’s a sticky dessert that is made up of malagkit or sticky rice, coconut milk, and brown sugar that gives the biko its brown crust-like top. The brown sugar is boiled to caramelization and is then poured onto a cake of malagkit rice and cooled down. It’s often topped with dry coconut curds that accentuate the biko’s nutty flavor. It’s a must-try for the guests of whoever’s hosting for the special occasion.

Read: The Big Four: Top Loved Kakanin and Their Origins

Bibingka is probably the original form of the humble rice cake that we Filipinos recognize as our traditional kakanin. It has been eaten by Filipinos since pre-colonial times and is most popular to eat during the Christmas season and after attending the simbang gabi or midnight masses. Bibingka hasn’t lost its charm over the Filipino people as its one of the most popular kakanins the Filipinos love to consume on the daily. It’s made up of glutinous rice, eggs, and coconut milk cooked in a pan over hot charcoal. It’s usually topped with a grating of coconut on top or brushed with butter and served on a plate-sized banana leaf.

There are many variations on the traditional Bibingka recipe with different regions and even households creating their own recipe for bibingka. Check out this Bibingkang Kamoteng Kahoy Recipe and Bibingka de Pastillas Recipe.

Another one of the most popular rice cakes in the Philippines, right alongside puto. Similar to many other traditional kakanin, suman is made up of rice and coconut milk where the rice is cooked in the coconut milk, wrapped in banana or palm leaves and steamed or boiled. Like other kakanins, suman is a favorite delicacy to eat on special occasions but many Filipinos also love to snack on it during the afternoon, especially after they just got off work.

Check out this Suman Platter Recipe.

Kutsinta is the much more eye-catching kakanin that’s a cousin of puto. Regularly displayed alongside puto by vendors, kutsinta is prepared the same ways as puto except with an extra ingredient of lye that adds sodium hydroxide to the recipe and gives kutsinta its distinct brown-yellow color and jelly-like texture. It’s usually served on a big banana leaf and is incomplete without grated coconut sprinkled on top. Children love to snack on kutsinta because of its sweet flavor and kid-friendly color and texture.

Palitaw got its name from the way it’s cooked. Litaw literally means to rise or float and to prepare this fluffy disk-shaped kakanin, the batter is first created from sticky rice grounded to powder mixed with coconut milk and sugar. The batter is scooped and dropped into boiling water. We’ll know its cooked when it floats on the water shaped like disks. Then it’s just a matter of rolling the cooked batter in sesame seeds, grated coconut curds, and sugar. This fluffy disk-shaped kakanin is a favorite amongst the young with its chewy texture and cute appearance.

Among all the traditional kakanin in the Philippines, sapin-sapin is by far the most vibrant one in terms of its color and flavors. Sapin-sapin, just like any other traditional rice cakes, is made up of sticky rice and coconut milk. But what makes the sapin-sapin unique and what contributes to its vibrant colors is that it’s made up of three different flavors layered up on top of each other. The flavors are traditionally jackfruit at the bottom, plain traditional rice cake flavor in the middle layer, and ube flavor at the top. This blends of flavor go well together along with sapin-sapin’s dense, pudding-like texture.

Espasol is a kakanin that originated in the Southeast province of the Philippines called Laguna. This kakanin is popularly sold at bus stops bought as pasalubongs to the families of commuters. Espasol is a cylindrical rice cake that’s small in shape but can be surprisingly filling to the stomach and is a favorite snack to those who call Laguna home. It’s made up of rice flour, coconut milk, sugar, and sometimes shredded young coconut. It’s completed with a dusting of rice flour that distinguished it from other traditional kakanins.

Maja Blanca is regularly sold by kakanin vendors and kakanin stalls are rarely seen without them. Traditionally sliced into square pieces, this kakanin is often referred to as coconut pudding because it’s primarily made from coconut milk. Along with coconut milk, Maja blanca’s ingredients are a mixture of corn starch, sweet corn kernels, and sugar altogether creates the sweet delicacy with a pudding-like texture. Maja blanca can sometimes be seen topped with cheese or latik.

Pitsi-pitsi is a kakanin that originally came from the province of Quezon. It’s traditionally made from cassava, coconut, water, sugar, and lye. Pitsi-pitsi is a favorite bite-sized chewy snack among Quezon natives and is usually topped by grated coconut or grated latik. Nowadays, modern modification of the pitsi-pitsi recipe replaces lye with baking soda because of the harmful effects that can be caused by lye. The baking soda still retains pitsi-pitsi’s chewiness and some say even made it better.

Cassava cake is a favorite among Filipinos for its unique taste that’s similar to tapioca. It’s not technically a rice cake because its main ingredient and what gives its unique flavor is cassava. The cassavas are peeled of their tubers and grated one by one and combined with the cassava cakes other ingredients of eggs, milk, and sugar. This makes the process of preparing cassava cakes one of the most tedious among the kakanin recipes. The tedious preparation is well worth-it as cassava cake with its unique flavor is definitely delicious. It’s also sliced like a traditional cake with its triangular shape.

This kakanin is the comfort food amongst comfort food. It’s the ultimate comfort food that rose on top of the other kakanin in terms of bringing comfort to the Filipinos because bilo-bilo or often referred to as ginataang bilo-bilo is a favorite kakanin of grandmothers to feed to their children and grandchildren. Ginataang bilo-bilo is essentially a bowl of coconut milk full of rice balls and an assortment of fruits and vegetables. The chewy rice balls, bananas, and diced roots of vegetables are all cooked together in coconut milk and starch from the sliced tubers. It’s sometimes added with sliced langka or jackfruit to add a tarty flavor to the bowl of kakanin.

Estrella, S. (2019, February 3). Kakanin: the history of 7 of our favorite sticky rice snacks. Retrieved from https://www.pepper.ph/the-history-behind-7-of-our-favorite-kakanin/