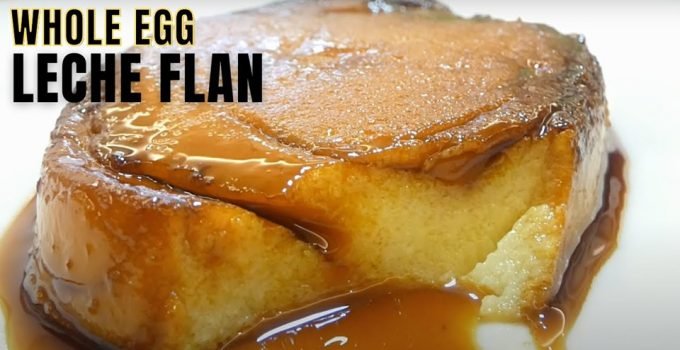 Leche Flan is a delicious Filipino dessert that’s made from a centuries-old recipe from across the globe. It’s one of the ultimate Filipino desserts with a smooth texture, sweet flavor, and a golden caramelized layer on top. It’s perfect for every occasion and is also used for toppings for other desserts like halo-halo.

I think that knowing how to make a leche flan at home is a huge advantage for home cooks because you don’t have to purchase batches of them from stores. You can easily make as many as you want at home for celebrations or if you just want a serving of one for dessert or merienda. Leche flan is a Filipino dessert that survived the test of time and has since been ingrained in our cuisine. No salo-salo or any kind of celebration is complete without one.

To make the traditional Filipino leche flan recipe, a custard base is needed using a mixture of egg yolks, condensed milk, and evaporated milk. For added complexity of flavor, calamansi or lemon zest is added to the mixture. This mixture is then strained then poured on mold specifically used for leche flan called llanera, which should have a thin layer of caramelized sugar ready at the bottom.

When that’s done and ready, the mold needs to be covered with aluminum foil and steamed–preferably on a steamer for 45 minutes.

A good technique to know if a leche flan is perfectly cooked from the steam is by inserting the dessert with a toothpick. If the toothpick comes out of the flan without any mixture sticking to it, the leche flan is ready.

Here’s one of our earlier leche flan recipes if you want to know more about it in detail: How to Make Leche Flan Recipe.

That’s basically the all-time go-to leche flan recipe that I think all Filipino cooks should know how to create in their kitchen. Because once you’ve mastered the basics, you can then easily experiment with your leche flan recipe and create tons of variations. You only need to search “leche flan” on this site to discover just some of the countless different things you can come up with when making leche flan at home.

But first, let’s dive into some interesting tidbits about this Filipino dessert that everyone loves.

What is Leche Flan?

I think that it’s very important to define what we’re making so we’re going right down to what exactly is leche flan.

First off, leche flan is the Filipino version of what is internationally known as creme caramel. It’s simply known as flan in the majority of Spanish speaking countries around the world. The three main components of the leche flan are its sweet and creamy custard base, an upper thin layer of caramelized sugar on top, and a sweet clear caramel sauce.

If these three components are present in a dessert from any place in the world, odds are, it’s that place’s version of leche flan or more specifically creme caramel. It’s most commonly served as a dessert even in other countries because of its signature sweetness.

I think it’s very important to know where a dish or recipe originated from so we’re going to dedicate this section to the history of leche flan. Where did leche flan come from?

How leche flan came to the Philippines wasn’t that well documented but it’s generally agreed upon that it was introduced to the country during the Spanish colonial period in the 16th century. Whether it came from Mexico through our trade routes or if it was introduced directly by the Spanish is still unclear.

One theory agreed upon by historians is that when egg whites were being used for the cement to build stone walls for the churches back then, the leftover egg yolks were used to create the first-ever leche flans in the country. In any case, leche flan or caramel creme certainly has Latin roots.

Through the colonization of the Americans, canned goods were introduced including evaporated milk and condensed milk. These ingredients were eventually used to create the modern leche flan that we know today.

Leche flan’s original name, creme caramel is French in origin. Beyond that, the very first forms of creme caramel were first introduced across Europe by ancient Romans. The Romans were the first-ever group of people to domesticate chickens and with that came an abundance of egg supplies.

With this abundance of ingredients, ancient Romans got to inventing various recipes and eventually came up with the first version of creme caramel, which was originally a savory dish that uses meat. However, when a genius came up with adding honey to the recipe, the sweet dish that it birthed took the world by storm.

Ancient Romans are famous for conquering other lands and through their building of an empire, they introduced the deliciousness of this sweet dessert all across Europe.

Other nations took a great liking to it and eventually spread it across the globe over centuries. That’s how we got to having the delicious leche flan on our shores.

Leche Flan around the World

We already discussed how leche flan was introduced in the Philippines and that our country isn’t the only one with this delicious dessert. Many countries, especially Latin countries, also have this sweet dessert, and have a significant place in their cuisine. It’s the same for many of our Southeast Asian neighbors who also had a history of being colonized by European countries.

The most distinguishing part about their flan is its more bitter flavor. This is from the way the Vietnamese prepare their flan. Common versions of their recipe require burnt caramel as the top layer or using black coffee as an ingredient.

In Puerto Rico, there are multiple different variations of flan. One of the most common is a coconut milk-based flan called flan de coco which is usually seasoned with cinnamon, rum, and vanilla. Around Thanksgiving, Puerto Ricans will serve a Thanksgiving version of the flan which is mixed with pumpkin, batata, and name puree.

In India, caramel custard is also a popular dessert especially around coastal cities and former Portuguese colonies. They don’t really do anything differently with their flan except when they sometimes add masala chai on the side.

Lastly, in Mexico, flan is an extremely popular dessert very similar to how popular it is in the Philippines. There are some variations of the dish found in Mexico. Cream cheese is added to the mixture in some parts of Mexico and is called Flan Napolitano. They also have a variation called Flan de Cajeta where they use goat’s milk.

The countries mentioned here are definitely not the only ones where a version of leche flan is prevalent. There are just far too many to list. I’m sure that for world travelers, leche flan or creme caramel is a dessert that they found in many countries.

Now that we’ve discussed everything that we should know about leche flan, let’s get to making a version of this sweet Filipino recipe which is making it with a whole egg rather than only using the egg yolk. All of the steps for creating the basic leche flan dish are practically the same except for that one ingredient.

If you want to learn more, scroll right down below. All of the information you need to know to recreate this delicious recipe is listed down below including the ingredients and the step by step process. If you’re a visual learner, we created a fun video for you to watch to recreate this recipe in your kitchen. Enjoy!